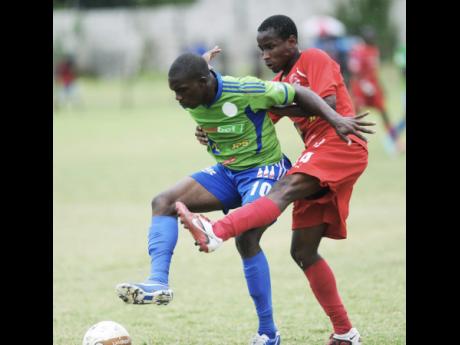 Former Montego Bay United (MBU) striker Allan Ottey says that despite several opportunities, he is not interested in returning to the Red Stripe Premier League during the January transfer window and is instead focusing on bringing his new team to the top- flight competition next season.

Ottey, who underlined that he hopes to return to the national set-up, also dismissed suggestions that playing in the second-tier competition could affect his chances of a Reggae Boyz recall.

Ottey, who won the Golden Boot award in the 5-A-Side Futsal Kick-off at the Jarrett Park launch last week, was speaking ahead of yesterday's fixture against former Premier League champions Wadadah F.C.

"I have won the Premier League twice already so what I am looking for right now is to bring a Confed (super league) team, Farkland, to the Premier League with me bring the experience man there," said Ottey, who have 19 top-flight goals and 91 appearances to his name.

The strike is also convinced that once he shows coach Theodore Whitmore and his technical staff that he knows how to find the back of the net, he will be given a chance in the national programme, despite the fact that he will not be playing top-flight football this evening.

"It's not definitely like that. I just have to just put in the work, score some goals and the national coach will see," said Ottey, who made his debut for the Reggae Boyz in May 2016.

The speedy 25-year-old, who spent six years with MBU, admitted that several Premier League teams, including his old employers have come knocking. However, he said he is not looking to make a return to the top-flight competition in the upcoming January transfer window, but is rather focused on taking Farkland to the Premier League Play-offs later next year.

"A lot of teams are willing to take me, MBU as expected, but I'm dedicating myself to Farkland right now," said Ottey, who netted his first goal in their 6-2 thrashing of Roaring River FC last Saturday.