Show me the money ... Bayer chief warns only 'crazy sum' will lead to Bailey's sale 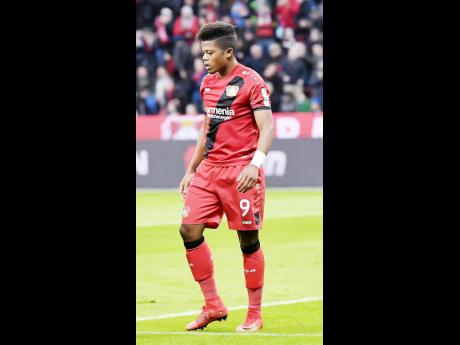 Although German club Bayer Leverkusen have insisted they will not sell their young star Leon Bailey, sporting director Rudi Voller said that they would be willing to consider offers if that were presented a 'crazy sum' for the Jamaican attacker.

Bailey continued his superb form in his breakout season with the Bundesliga side, scoring the lone goal after 70 minutes in Bayer Leverkusen's 1-0 win over Borussia Monchengladbach in the DBF Cup on Wednesday, securing a place in the quarter-finals.

The Jamaican broke away down the left and calmly slotted the ball inside the near post of the Monchengladbach custodian for the game's only goal.

The 20-year-old Bailey is currently one of the hottest prospects in the German Bundesliga, having joined Leverkusen from Belgian side Genk last January.

His impressive form has caught the attention of the big clubs in England, Spain and Italy, with the latest reports in England suggesting that Chelsea are preparing a January bid, with Manchester United also set to join the race, with Leverkusen contending that the winger is not for sale.

But even though Leverkusen have stated that a transfer is out of the question, Voller was quoted: "(The club) have shown in recent years that we can say no," before adding, "If there are crazy sums, (we) will consider them."

Leverkusen paid €12 million for the Jamaican, who is under contract until 2022, and has so far scored seven goals and set up four in 15 matches in all competitions this season.

Chelsea have reportedly tabled £22 million for Bailey, Arsenal are planning a £15 million bid, while Leverkusen have valued the player at around £55 million.

Meanwhile, in an interview with espnfc.com recently, the player said that he was not caught up in the transfer speculations and will continue to work hard to achieve his 'dream'.

"I am not focused on what will be, but only look at what is," Bailey said. "If you work hard, you will get a result and dreams will be fulfilled if you prove yourself on the pitch every day."