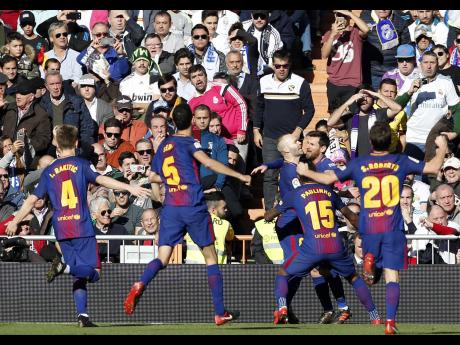 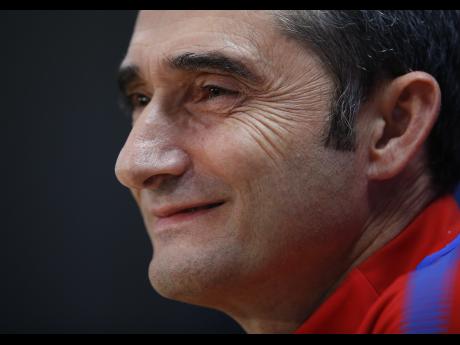 There is a clear winner of the Spanish league as it approaches the midway point.

Four months into his first season as Barcelona's coach, Valverde has helped the team to recover from the shock exit of Brazil star Neymar and take a commanding lead of the Spanish league.

The 53-year-old Valverde was already considered one of Spain's top coaches for his stints at Athletic Bilbao, Valencia, Espanyol and Greek club Olympiakos before he replaced Luis Enrique. But he started the season under the most pessimistic conditions of any of Barcelona's coaches since Pep Guardiola's debut in 2008.

Real Madrid had just won the Champions League and La Liga titles before Barcelona were left reeling by Neymar's move to Paris Saint-Germain.

That was followed by two demoralising losses to Madrid in the curtain-raising Spanish Super Cup. And with the season just under way, Ousmane Dembele - the forward signed by Barcelona to replace Neymar - tore a tendon in his right leg.

But while everyone else feared a disaster, Valverde saw an opportunity.

The departure of Neymar broke up Barcelona's fearsome attack with Lionel Messi and Luis Suarez. But despite their goals, their erratic contributions in defence had left Barcelona exposed at the back. Valverde turned Neymar's loss into a collective gain.

He refocused the team on first being defensively sound by either playing another midfielder, or a forward who applied more pressure when the team lost the ball.

The success of former Barcelona forward Valverde is undeniable - 25 matches across all competitions without a loss since that pair of defeats to Madrid. It also tops the Spanish league for fewest goals conceded (7) and goals scored (45).

And Valverde got the biggest prize of all last Saturday when he out-coached Zinedine Zidane in a 3-0 victory at Madrid's Santiago Bernabeu.

Barcelona have sprinted to a commanding lead of the league title race after 17 of 38 rounds.

Second-place Atletico Madrid trail by nine points, Valencia by 11, and Madrid by 14, although they have a game in hand.

The calendar also favours the Catalan club, which will host their top rivals in the second half of the season. Barcelona already drew 1-1 at both Atletico Madrid and Valencia before humbling Madrid in front of their fans.

Atletico are expecting a boost from the return of Diego Costa and the arrival of Victor 'Vitolo' Machin in January when the club's FIFA-imposed ban on registering new players ends.

PICK OF THE PLAYERS

Once again, Messi is driving Barcelona toward the title.

Madrid's Cristiano Ronaldo may have matched him with his fifth Ballon d'Or award, but Messi is outscoring him 15-4 in the league. The Argentine has continued to flourish under Valverde as a free-ranging forward, floating across the front of the attack and back into midfield as he probes for weaknesses in the defence.

Andres Iniesta, who was often rested by Luis Enrique in league matches, is featuring more under Valverde and thriving with the consistent playing time, while newcomer Paulinho has impressed by bulking up Barcelona's midfield.

Saul Niquez, Atletico's 23-year-old midfielder, is among the most well-rounded players in the league, proving a goal-scoring threat when he goes forward, along with sound passing and tackling in defense.

While Marco Asensio was the hot topic following his goals against Barcelona in the Spanish Super Cup, Madrid's 21-year-old forward has fallen out of Zidane's favor as the months go by.

Carlos Soler has surfaced as the latest promising talent at Valencia. The 20-year-old midfielder has shown excellent passing skills and is a large reason for the team's successful campaign after struggling in recent years.

At age 21, Rodrigo "Rodri" Hernandez has excelled since replacing the injured Bruno Soriano in the heart of Villarreal's midfield. Rodri leads the league in balls recovered in defense. He is reported to be close to a move to Atletico after also triggering interest from Barcelona.