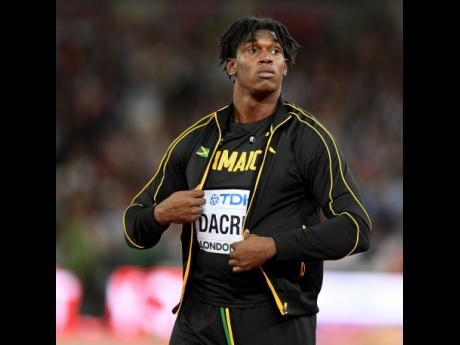 Pan-American Games discus champion Fedrick Dacres dazzled fans at last Saturday's Charlie Fuller Memorial Throws and Jumps meet with a mammoth throw in the men's discus. With the morning air still cool at Manchester High School, Dacres whirled his disc 65.16 metres to highlight the day's proceeding. There were also performances of note in the boys Class One discus and in the girls Class Two long jump.

Dacres, the 2015 and 2017 World Championship finalist, went into the circle for his third throw after a meek effort of 60.47 metres and a foul to show for his first two attempts. Then came his high flying 65.16 metre effort. As confirmation, the Julian Robinson - coached athlete launched his last throw 63.30 metres. His training partners Traves Smikle and Basil Bingham placed second and third with marks of 60.70 and 55.65 metres respectively.

"It was a good opener for the season and I'm thankful", Dacres understated afterwards, before outlining the year's goals. "At this point, I'm just trying to do better that I was last year so it's just a work in progress at this point."

He would like to be in the circle at the Commonwealth Games. "I'm hopeful that I'll be a part of the team and I'll be competing."

The men's discus took place after Carifta champion Roje Stona of St Jago High School eased his first throw in the Class One event out to a distance of 60.93 metres. That's almost a five metres improvement over his winning mark of 56.18 at Jamaica College the previous week.

"Normally, I'm a good starter and then try to go harder because I thought I went easy on the first one", said the gentle giant.

Phillipe Barnet of Excelsior was far back at 55.47 metres.

Dacres and Stona weren't the only ones to impress. Though practice has been hampered by recent rain in most cases, there was a thumping girls shot put competition won by Stona's schoolmate Gabrielle Bailey. She pumped her last throw 13.72 metres to beat the redoubtable Fiona Richards of Edwin Allen to leave her coach Marlon Gayle pleased.

"Yes in a sense because I know she's way better than that but then we haven't had the chance to do as much shot put as we want", assessed Gayle.

The boys Class One shot held centre stage in the meet's afternoon session. Munro College strongman Danree Delancey fired his way to the gold with a booming throw of 17.77 metres to deny improving Cobe Graham of Calabar, who set personal bests of 17.29 and then 17.32 metres in second place. In this event, Commonwealth and Pan-American Games shot put champion O'Dayne Richards served as part of the team measuring the throws.

Notably, Akelia Smith of Edwin Allen aced the best long jump of the day with a meet record taped at 5.93 metres. By comparison, the top Class One jump was 5.60 metres. Known more for her high jump prowess, Shantae Foreman took the Class Three long jump by spanning 5.73 metres.