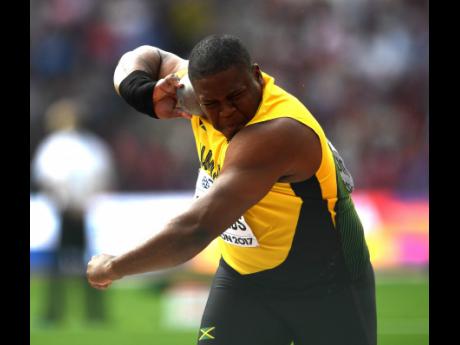 O'Dayne Richards is steeling himself for a battle in the shot put at the upcoming Commonwealth Games. Speaking in Mandeville last Saturday, Richards said that he was looking forward to throwing against the likes of World champion Tom Walsh at the games in April. He also has the World Indoor Championships on his radar.

The MVP Track Club star thrower beat the New Zealander to win the Commonwealth gold medal in Glasgow, Scotland, in 2014 and knows him to be a worthy opponent.

"I'm going up against Tom Walsh, who is the World champion so that promises to be good competition," he remarked, while spectating at the Charlie Fuller Memorial Throws and Jumps meet at Manchester High School.

Both men have improved since Richards won that duel with a personal best of 21.61 metres. Walsh, who is also the reigning World Indoor champion, has reached 22.21m, while Richards increased his best to 21.96m last year.

He was in the stands when Walsh won the World title in London having uncharacteristically missed out on qualifying for the final. Still disappointed, he is looking ahead.

"It's in the past and hoping to do better", the 2015 World Championships bronze medallist resolved.

He also named Jamaican Ashinia Miller and Australian Damien Birkenhead as Commonwealth contenders. In reference to Birkenhead, who was fifth in Glasgow, he commented: "He's coming up very nicely and I expect big things from him."

With the World Indoor Championships and the games coming respectively in March and April, the 29-year-old Jamaican is working hard in practice.

Asked for his training goals, he enumerated as follows: "To be a lot faster in the ring, also to hit the positions to get optimum power from the throws because it takes big throws to win medals now."