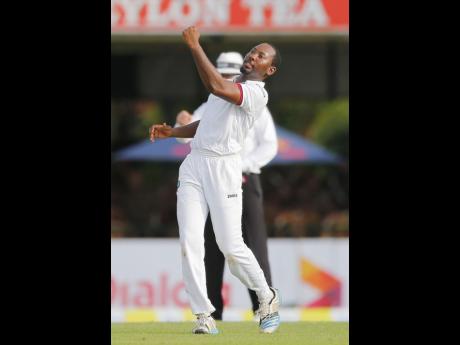 Discarded West Indies left-arm spinner Jomel Warrican has described as splendid his current bowling form, and he is hopeful that in the not-too-distant future, he will again be able to don the colours of the regional side.

Warrican, who made his Test debut in 2015 but has not represented the West Indies in two years, made the revelation after picking up back-to-back Man of the Match awards in the ongoing three-match unofficial Test series between West Indies A and England Lions.

The 25-year-old picked up seven for 33 and one for 54 to go with a career-best batting effort of 71 not out in the first game at Trelawny Stadium, before returning to claim eight for 34 and four for 69 in the second at Sabina Park on Monday.

"The first Man of the Match [award] was well-deserved, but to pick up the award [back-to-back] is a bit heart-warming,'' said Warrican.

"The performances also contributed to us sealing the deal and winning the series, and for that, I am happy. I just hope that we will be able to [play] as well again in the third game in Antigua.''

The Barbadian, who has 11 wickets from four Tests, at an economy rate of 4.17, average of 46.27, and best bowling haul of four for 67, generated bounce and turn, while using variation in-flight to deceive the English batsmen throughout the matches.

"It is a splendid patch of form in terms of my career, and the hope is to just grab the moment.

He added: "I felt a bit hard-done at one stage about being dropped so early in my career, but I guess these things do happen. Right now, I think I am bowling very well." Warrican believes he is ready for international cricket again.

Warrican, who is also a shoo-in for the Man of the Series award against the Lions, is also looking to bring his form into the three-match one-day series.

The third unofficial Test will be played at the Sir Vivian Richards Stadium, beginning next Monday.