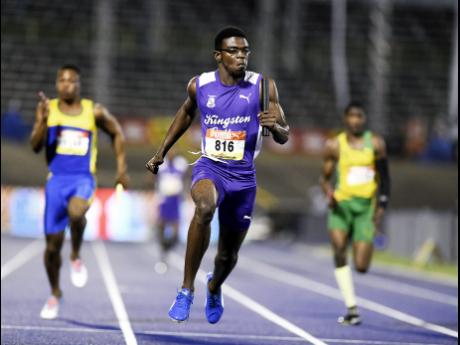 His never-yield spirit has seen Dashawn Morris move from being a 51.5 second quarter-miler to one who is on the verge of dipping under 45 seconds in three years.

If his season continues on the same path, Morris will soon join his fellow Kingston College (KC) standout Akeem Bloomfield as the only Jamaican under-20 athletes to have run sub-45 seconds, having done 45.09 seconds at the ISSA/GraceKennedy Boys and Girls' Athletics Championships this year.

"It was tough because when he (coach Neil Harrison) came, I was running 51.5. That was about three years ago, and now it is a big jump, and I thank God for it," Morris said after arriving from the Carifta Games on Monday.

"I have to thank my coach because he sticks with me."

Harrison took Morris under his wing when he started coaching at KC four years ago, he told STAR Sports last week. "When I came here, he couldn't make the team, and I kept him there and worked with him, and as they say, the rest is history," Harrison said.

Morris broke the 46 seconds barrier for the first time at the Corporate Area Championship when he finished second to Calabar High School ace quarter-miler Christopher Taylor.

He followed that performance with a huge personal best of 45.09 at Champs, and many wondered if he would have gone under 45 seconds if Taylor was in the race.

"My only regret is that Christopher Taylor wasn't in the race," Harrison said. "Chris is a very good athlete, but I just don't think he is in the shape this year to beat Dashawn."

Morris, who is in his final school year, has been receiving many offers from universities in the US but has not yet made a decision regarding where he will continue his studies.