Man U tighten grip on second in EPL 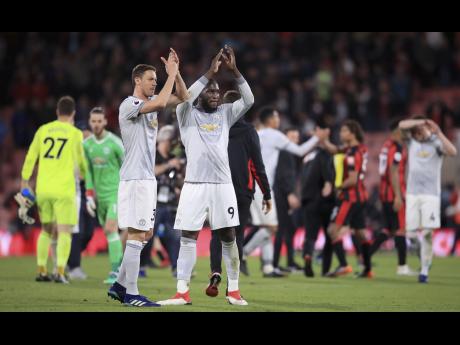 Chris Smalling and Romelu Lukaku scored as Manchester United earned a routine 2-0 win at Bournemouth yesterday to strengthen their grip on second place in the Premier League.

Smalling netted his third goal in six league games by meeting a low cross from Jesse Lingard and slotting into an empty net in the 28th minute. Lukaku then sealed the win in the 70th after coming off the bench and running on to a through ball from Paul Pogba and finishing with a first-time shot.

Bournemouth were denied a penalty shortly after the half-time break when Luke Shaw held on to Callum Wilson as the striker tried to reach a cross from Josh King, but referee Graham Scott waved away the appeals.

It was a much-needed win for United, who lost 1-0 at home to West Bromwich Albion on Sunday to hand the league title to crosstown rivals Manchester City. It keeps Jose Mouinho's team four points above third-place Liverpool and rebuilds some momentum going into Saturday's FA Cup semi-final against Tottenham.

"We all knew we weren't good enough against West Brom and we needed to stand up tonight and put on a performance. You could see the lads were up for it," Smalling said. "Our goal for a little while now has been to make sure we get to the FA Cup final. This is the perfect way to lead into the weekend."