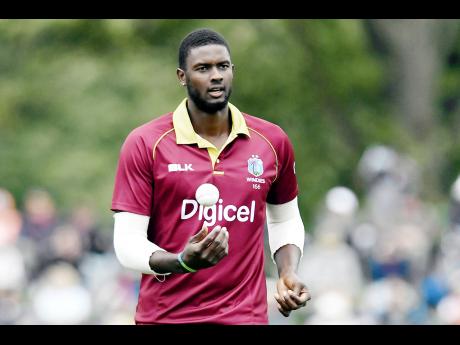 Captain Jason Holder has underscored the importance of several One-Day International (ODI) series leading up to next year's World Cup in England, stressing it was vital that the Windies used them to gain confidence, momentum and a settled line-up for the global showpiece.

In preparation for the May 30 to July 14 event in England and Wales, the Windies will play home and away ODI series against Bangladesh later this year, tour India for another five matches before hosting England early next year.

"But we've got four series leading up to the World Cup and we've got to handle those series first, think about those series and try a few combinations in terms of the make-up of our final squad.

"This year is obviously very important for us. If we can do well in these one-day series we have leading up to the World Cup, improve our ranking and gain some confidence."

The Caribbean side missed out on automatic qualification but secured one of the two spots up for grabs by finishing second in a 10-team qualifying tournament in Zimbabwe last month.

Favourites at the start, the Windies played unbeaten in the preliminary round, lost one match in the Super Six second stage before clinching their spot in the final against eventual winners Afghanistan.

While the Windies' participation in the tournament - which involved the likes of Nepal, Hong Kong and Papua New Guinea - was widely regarded as somewhat belittling for the two-time former World Cup winners, Holder said it had been a blessing in disguise.

"Playing in the World Cup qualifiers was not all bad in a way. I think it was an opportunity to come together as a side, get some wins under our belt, play some of the Associate nations and some of the nations which qualified as Full [Member] nations," explained the 26-year-old, who led the Windies at the last World Cup in Australia and New Zealand.