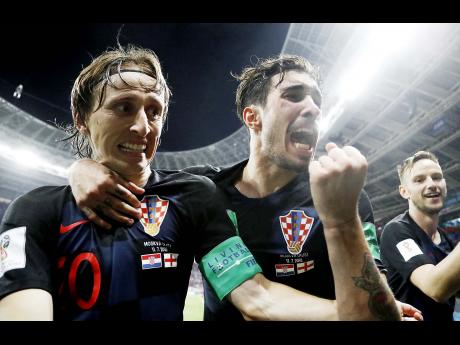 One of the most notorious dives in football history took place the last time France played Croatia in the World Cup.

Les Bleus led Croatia by a goal in their 1998 semi-final at Stade de France when French defender Laurent Blanc gave Slaven Bilic a slight shove on the chest in jostling during a free kick.

Bilic shouted and slammed the palm of his hand into his face, as if he had been struck on the head. Spanish referee Jose Manuel Garcia bought the act in the pre-video review age, and Blanc was ejected for the first time in his career.

Despite seeing the replay after ward, FIFA refused to retract the penalty. Blanc missed the final, when France beat Brazil 3-0 for its only World Cup title.

Croatia advanced to their first World Cup final with a 2-1 extra-time win over England on Wednesday night, a day after Les Bleus beat Belgium 1-0. The match two decades ago remains on the mind of current Croatia coach Zlatko Dalic.

"Maybe the dear Lord is giving us an opportunity to settle a score," he said.

A victory in the final for the nation known for their red-and-white checkered jerseys would be the nation's greatest sporting moment since breaking from Yugoslavia to become an independent state in 1991 a year after their national football team started playing.

France are a European football power, their team able draw from a population of about 65 million.

"They have upped their game over the past several games," Ivan Perisic said.

Croatia have just over 4 million people, the fourth-smallest of the 32 World Cup teams ahead of Panama, Uruguay and Iceland. They have a chance to be the least-populous nation to win since Uruguay took the title in 1950, when they were a nation of just over 2 million.

"We're a small country with so many successful sports people," defender Dejan Lovren said through a translator. "Over the last couple of days people have recognised that."