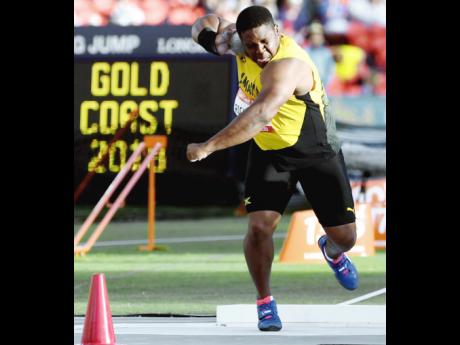 O'Dayne Richards, the national record holder in the shot put, is using the rest of the season as a stepping stone to achieve one of his career's objective - winning a gold medal at the IAAF Athletics World Championships.

The St Georges College past student has won the event at the Commonwealth Games and the Pan American Games. He is also looking to add the Central American and Caribbean Games title to his illustrious resume later this month.

But, it is standing atop the podium at a World games that the 29- year-old covets the most.

"I would really want to win at the World Championship next year. I plan to use the information gained this season to help me prepare for next season," Richards told STAR Sports recently.

"This season is not really one of the toughest years in terms of competitions, so I am just using it to get ready for next season."

Richards only managed fourth in his title defence at the Commonwealth Games in April this year with a throw of 20.80m, a distance which is way off his lifetime best of 21.96 he did last year at the Rabat leg of the IAAF Diamond League.

But the putter believes the competitive nature of the event will propel him back to that region and beyond later this season.

"Shot put right now is the best it has been in years. I am grateful to be competing this time," Richards said.

Richards registered his season best performance at the National Senior Championships with a 20.86m effort.

He is selected to compete at the CAC Games which is set for Barranquilla, Colombia.

The games will begin on July 19.