Determined to get better ... Bailey focussed on improving this season 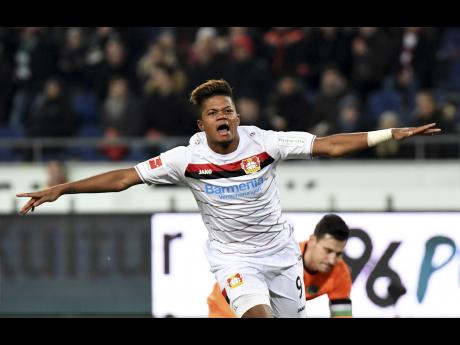 Bayer Leverkusen’s Jamaican-born winger Leon Bailey, says he is focussing on doing even better this season, after being named as the Bundesliga’s best newcomer for the 2017/2018 campaign by popular German football magazine 11Freunde.

The award was won last year by former Borussia Dortmund striker Ousmane Dembele, who is now at Barcelona.

Bailey, 21, who is recovering from a shoulder strain, says he is looking forward to the new season, which gets underway this weekend and is determined to better his nine goals and seven assists return from last season.

“I am elated, happy and proud of myself and the people that have worked with me to accomplish these goals we set from I was young in Jamaica at Phoenix,” Bailey told    . “It is a positive feeling for me to receive this award and I am grateful. I will go into the season, as always, giving my best.”

There has been much speculation about Bailey’s future following his breakout season in the Bundesliga. However, the youngster says his focus is on continuing his development and helping his club to achieve its objectives this year.

“I would like to improve on last year’s performance and establish myself in the league, perform well in the Europa League and help my team to be all they can be. I’d like to be better than last season and become a better player everyday and continue to be a role model on and off the pitch,” Bailey outlined, before giving an update on a shoulder injury that has kept him out of action for portions of the pre-season.

“My shoulder is almost better now, it was a strain and I thought it best to rest it. I’m looking forward to the season and performing well and making my family, my management, my club and my country proud,” Bailey said.

Leverkusen will take on Monchengladbach on Saturday at 11:30 a.m. in their Bundesliga season opener, with reports suggesting the Jamaican should be fit and ready to feature.