'It will be a battle!' - Italy-bound Reggae Girl Carter braces for T&T fight 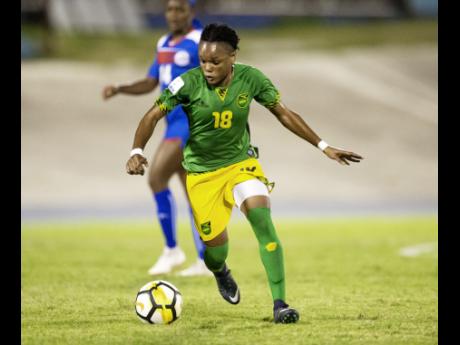 Jamaica striker Trudi Carter said that playing against Caribbean rivals Trinidad and Tobago will be like a 'battlefield when the teams meet in the CONCACAF Caribbean Women's World Cup Qualifier tonight at the National Stadium, starting at 7.

In the first game, Antigua and Barbuda will meet Suriname at 4 p.m.

Both teams are on six points apiece after two games, however, the Reggae Girlz have a superior goal difference.

Carter, who has scored two goals in two games so far, is fully aware of the importance of getting full points against Trinidad and Tobago in the feature game.

"I will always say that Trinidad and Jamaica is a big rivalry. It will be a battlefield tomorrow. I told the girls don't watch what Trinidad have done. They will be motivated to play against Jamaica," the 23-year-old Carter told STAR Sports.

She also said that the team is gelling and getting there.

Carter will be particularly inspired after it was announced that she will be signing a contract with newly formed Italian Women's League team AS Roma.

"The pre-camp and playing in the CAC Games has done well. Everybody is focused, all of us are ready. We are gelling as a unit and will be getting better" she added.

At the completion of the tournament next Sunday, the top three Caribbean nations will qualify for the CONCACAF final stage scheduled for the United States of America in October.

After that the top three from CONCACAF will advance to the 2019 FIFA Women's World Cup in France.