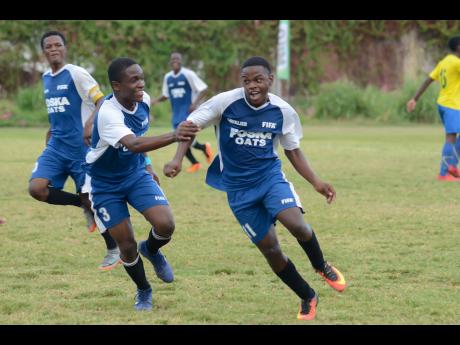 Cavalier's Javon Smith (right) celebrates with his teammate Jovan Linton after scoring the opener in his team's 2-0 win over Santos in the KSAFA Under-15 final at Alpha yesterday.

Jhavon Smith followed up on his wonderful strike in the Kingston and St Andrew Football Association (KSAFA) Under-15 semi-final with a big goal to help Cavalier beat Santos 2-0 to lift the title yesterday at the Alpha Institute.

Smith struck from just outside the 18-yard area, which gave the goalkeeper little chance and sent his team in the lead in the 13th minute. Phillander Wing scored the second goal to secure the win for the Cavalier outfit.

The Excelsior High School student was also good in midfield throughout the entire game, impressing with his passing, dribbling, and tackling from the centre of the park.

"My play in the game made the team played better, by scoring the first goal, it gave the team confidence. We came into the game high on confidence and there was no doubt that we would win the game," the 15- year-old Smith told STAR Sports.

Smith's coach Gregory Hall lauded the player and said he was good at shooting from outside the 18-yard area.

"He did the same in the semi-final win against Mountain View. He came out and worked hard for the team and that is what we always want from him. He is a good player," Hall said.

In the KSAFA/Milo Under-13 final, which was played earlier at the same venue, Harbour View edged Browns Town 2-1.