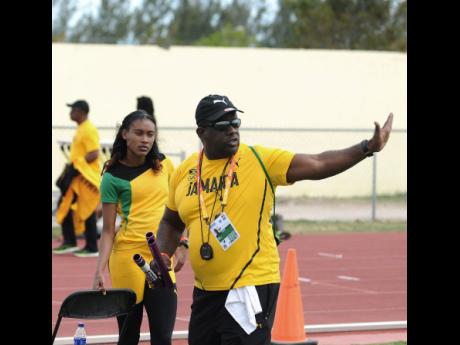 Coach Paul Francis (right) makes a point during a training session at the 2017 World Relays in The Bahamas. Looking on is 400m athlete Stephenie-Ann McPherson.

Paul Francis, head coach of the renowned MVP Track and Field Club, believes that Jamaica's athletes will be trained to peak at next year's IAAF World Championships in Doha, Qatar, even though it is scheduled to be held two months later than ever before. He is more concerned about the date of the Jamaican National Championships. In fact, he suggests that the local selection meet be moved from its usual slot at the end of June.

Asked recently if it will be difficult to peak athletes for the September 28 - October 6 World Championships, Francis sounded an optimistic note. "I don't think it will necessarily create a challenge if you know what is required by coaches for excellence is to determine which is your major assignment for the following year and you work backwards", he tutored. "A better question would be to ask whether or not other things would have been affected by the lateness of the World Championships."

Told that the Jamaica Athletics Administrative Association was contemplating the date of the 2019 Nationals, Francis offered, " In my opinion, they would have to move it one way or the other or they would have to get their creativity to work to find a way, a balance, how to have a Trials in June and have fit athletes in October."

With major Championships usually held in August, he sympathised, "that's an administrative headache they will have to face."

The last time Jamaicans had to peak in October, they won 9 medals at the 2000 Olympic Games. That was the best medal take by Jamaica to that point. The National Championships, or Trials as they are known, were held in June then, but there were several events where selected athletes lost the form they displayed at the Nationals. These included the men's 100 metres, the women's 100 metre hurdles and the women's 400 metre hurdles.