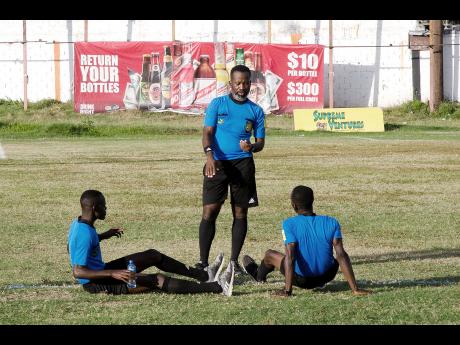 Shorn Hector/Photographer Match official Keeble Williams (center) and his colleagues in dialogue at half time as they prepare for the second half of a Red Stripe Premier League game between Tivoli Gardens FC and Waterhouse FC at the Edward Seaga Complex last season.

In an attempt to keep up with the growing trend in world football, manager of the Referee's Department at the Jamaica Football Federation, Victor Stewart, says there are plans to introduce technology to the Red Stripe Premier league this season.

Stewart told STAR Sports that he has seen where technology has assisted in improving the quality of football and he is ready to add this element, on a small scale, to local football.

"As far as our resources are concerned, it is difficult to use technology at every level,especially at the schoolboy level, but at the Premier League level we are going to be having radio communication pieces. We will not be able to have VAR (video assistant referee) in the system but we will be using radio communication system," Stewart explained.

The former FIFA referee said the equipment has already been purchased and he is hoping that it will arrive on time for the start on the new season on September 16.

"A few of our international referees, who travel, have their personal equipment, but we have ordered some for the purpose of using in the Premier League, and, hopefully, we can get them for the start of the season, and if not, we should get them by the end of September or mid-October.

"But, this season all referees in the Premier League will be using a radio signal and they will be able to communicate with the fourth official and the assistant referees," Stewart said.