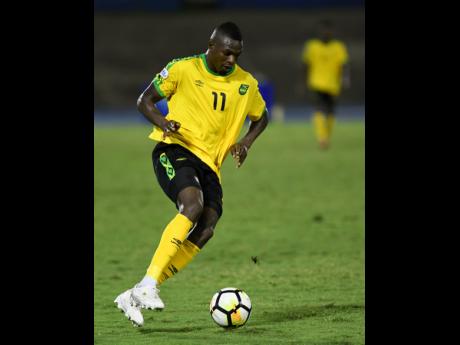 Reggae Boyz striker Cory Burke said that he was not satisfied with his two goals against lowly Cayman Islands in the CONCACAF League of Nations opener last Sunday at the National Stadium.

Burke netted in the 35th and 66th minutes in Jamaica's 4-0 victory over their Caribbean neighbours. His fellow striker Darren Mattocks also scored a brace, with goals in the 2nd and 58th minutes.

However, Burke, who is also experiencing a purple patch in Major League Soccer (MLS) with Philadelphia Union, where he has netted eight times so far this season, was left unsatisfied with his performance for the Reggae Boyz.

"I got two goals tonight, but that was not good enough playing against a team like The Cayman Islands. I wanted more," Burke told STAR Sports last Sunday night.

"My confidence level is always high whether playing here or away. Once I touch the pitch, I try to give my all for the team. The objective is to score goals and do the other things necessary to win games," added the lanky striker.

The team featured a mixture of local-based players from the Red Stripe Premier League and overseas-based professionals and Burke said that he was pleased with the level displayed by the locals and singled out former St George's College Manning Cup star Alex Marshall, who currently represents Cavalier.

"We have a good crop of players in the national programme, a mixture of local talent and overseas-based professionals in the team, and we are getting there as a unit. Alex Marshall is a very good talent, who I try to motivate. I want the best for him," Burke shared.

"The guys need to come out with a level of intensity even playing against lowly ranked teams. We have some good local talent who the coach is giving time to play in international games," added the 26-year-old.

Burke is now looking forward to his club's next game against Montreal Impact in the MLS on Saturday.

"I have eight goals in all competitions, and I just want to continue scoring goals for my Philadelphia Union team. We have a game against Montreal Impact next Saturday," added the former Old Harbour High school and Rivoli United star with regard to his performances for Philadelphia Union since moving from Bethlehem Steel in the United Soccer League.