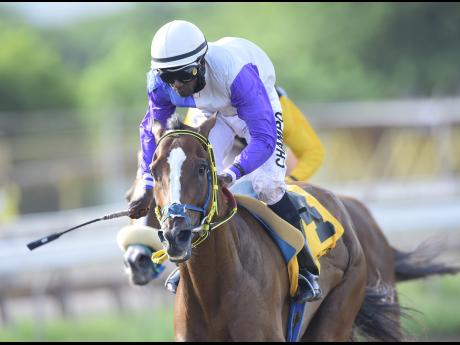 DYSFUNCTIONAL must be the best 'floater' in training at Caymanas Park, hovering between overnight allowance and grade one, holding his own among the best of the best and using that form to strike whenever the system allows him to slip down in class.

Having struck twice this year, beating stablemates TIMEFORARMS and BIRDIE MY LOVE in overnight allowance in March, followed by a romp in a $1m claiming event in July, DYSFUNCTIONAL's class was further exposed last month when he chased home United States-bred HILLY'S HALO at seven furlongs.

Returning to his favourite hunting ground, overnight allowance, for the third time in five months, DYSFUNCTIONAL ran smack into HILLY'S HALO, the most improved horse in training, who made it four-in-a-row in her steady march to grade one.

Whereas HILLY'S HALO's superb performance was expected, posting 1:24.0 for the seven-furlong event, it was DYSFUNCTIONAL's run, beaten by only two lengths, gaining with 120lb, that caused heads to turn and should make him a tough horse to beat on Saturday, going a half-furlong shorter in the same class.

Though he is giving away weight all around to recent winner, three-year-old HONEY RYDA, and old rival BIRDIE MY LOVE, who was spotted flying home for fourth at five furlongs straight behind last Saturday's upsetter, HOVER CRAFT, DYSFUNCTIONAL has proven himself a master of middle-distance races in overnight allowance.

After clinically beating TIMEFORARMS and BIRDIE MY LOVE with topweight at eight and a half furlongs in March, he spent the next three months playing second fiddle to stablemates SEEKING MY DREAM, HOVER CRAFT and MR UNIVERSE, outclassed and oustped in open allowance and grade one events, before being gifted a $1m claiming race early July.

On his return to overnight allowance in August, he ran his usual honest two-turn race, finishing third behind SUPERLUMINAL and DONTAE at 10 furlongs. When he returned three weeks later at a preferred middle-distance trip, he turned the tables on DONTAE behind HILLY'S HALO.

HONEY RYDA is new to the class and faces a baptism of fire, but BIRDIE MY LOVE, especially with 111lb, getting 14lb from DYSFUNCTIONAL, is a dangerous customer at the handicaps and distance. She, however, likes to dictate the pace, which could prove tricky should speedy SIR BUDGET make the line-up after being scratched lame a week ago.

DaCosta also has three-year-old WITHOUT EXCEPTION in the event, returning off a two-month lay-up, working well and capable of ensuring an honest pace for his more race-fit stablemate, who might need some help to drag BIRDIE MY LOVE off her bridle sooner than her rider would have liked.

The handicaps are against him but DYSFUNCTIONAL is a pro and only four pounds heavier than his brave run behind HILLY'S HALO, a performance which should land him in the winners' enclosure.