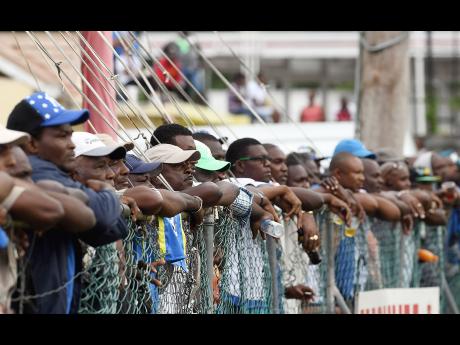 Spectators looked on at the Mount Pleasant vs Albion Mountain match in the Eastern Confederation football final at Drax Hall in St Ann on Sunday May 7,2018. 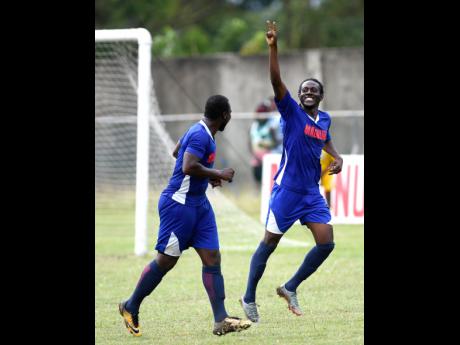 Not even the pelting raining could prevent a sea of Mount Pleasant Academy fans from making the treacherous journey from St Ann to the Spanish Town Prison Oval in St Catherine last Sunday.

The supporters, donning blue shirts with the Mount Pleasant logo emblazoned across the back, could not miss their club's debut game in the Red Stripe Premier League despite weather reports promising an all-island rain as tropical storm Isaac faded from the Caribbean Sea.

The supporters, who made their way from all over the Garden Parish, made the Prison Oval feel as though it was their home field as there were only signs of blue in the main stand.

Craig Clarke, who is from the community of Runaway Bay, said Tropical Storm Isaac would have to be a category five hurricane to prevent him from making the trip to Spanish Town.

"This rain couldn't stop us," Clarke told STAR Sports at the halfway mark during the match. "It would have to take a category five hurricane to stop us."

He continued: "I figured the game might be postponed but we never wanted to run the risk of not coming and then we miss it. It is playing, so we are happy."

Another supporter Clifton McIndoe said: "There is fever in St Ann about football now and it is all because this team has been doing well. The owner (Peter Gould) has a vision and he is executing it."

The fever around Mount Pleasant took life when they muscled their way to the nation's top flight with a series of gritty wins in the JFF/Magnum playoff series.

They augment the spirit around the club when they hired Donovan Duckie, one of the most sought after coaches in the league weeks after qualifying for the league.

Duckie told STAR Sports that he has since gone out and handpicked over 10 players to bolster the squad.

"This team is really good. It is not because it is from St Ann, but when you look at the players they have gone out and gotten, it says that they can play some entertaining football, which is what the fans want," McIndoe said.

Mount Pleasant will play their first home game at Drax Hall this Sunday against Waterhouse and McIndoe believes a record number of supporters for a RSPL game outside of the National Stadium could turn up for the fixture.

"Many people turned back today because of the rain, but Sunday coming, rain or shine, Drax Hall not gonna have enough space for the number of people who will turn up for game," McIndoe said.

Last Sunday, the debutants did not disappoint their fans as they beat defending champions Portmore United 2-1.