Williams looking to help Humble Lion up the table 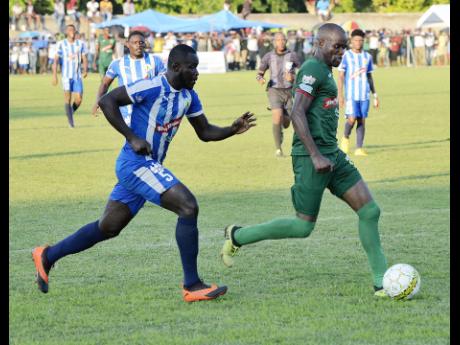 Levaughn Williams (right) from Humble Lion dribbles away from Ricardo Campbell (left) from Mount Pleasant United to score the only goal of the match as Humble Lion register their first win of the 2018-19 Red Stripe Premier League season last Sunday.

But the attacker, who is currently training with the Jamaica Defence Force (JDF) and will soon be enrolled as a solider, admitted that it has been a slow start to the season by him and his team.

But he now expects the team to build on their first win of the season, and he is also looking to get back to his prolific best when his training with the military ends in November.

"Yes this is my first goal of the season. The team has been under-performing from the beginning of the season but now we are trying to get the team forward so we just have to keep focus and work hard," he said.

LIVE UP TO EXPECTATION

Although the club possesses renown local strikers in their squad such as Craig Foster and Francois Swaby, Williams believes they have all failed to live up to expectation this season.

"I definitely need to sharp up some more. I am in the army now so I need more work to get sharpen up some more. But by the end of November I should be sharp enough to give my best in the games. The (JDF) training will be finished soon. We have a training at the ninth, 10th and 11th of November and after that we will have free time to train and get back to our usual work," he explained.

"This has not affected my training, because I am basically reserve and football is my regular job so I know how to balance it," he added.

Nevertheless, he thinks they have a squad capable of winning the title this season.

"It's one aim and that is to get ourselves in the top two and take it from there. I have been at Humble Lion for five seasons now and it's time for us to lift the trophy," Williams said. "This year we have a great group of players and a great team and from I've been at Humble Lion this team is the strongest. So we have the team and players that can lift this title," he said