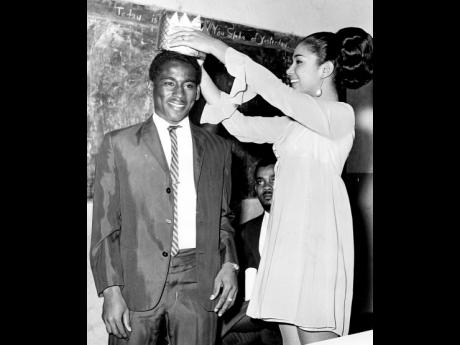 Les Brown, then a student of Vere Technical High and a past student of Boys' Town, being crowned Boy of the Year by Miss Jamaica Laurel Williams, at Boys' Town in 1967. He was chosen from among nine other boys for outstanding improvements in the academic and sports field during the year. 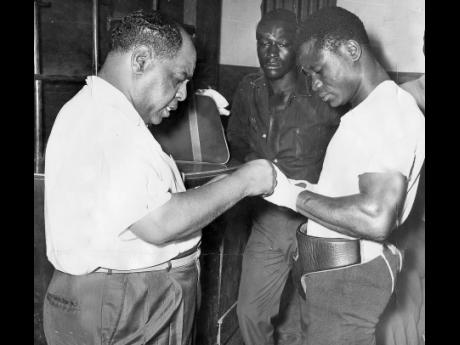 Gleaner Photograph Trainer Harry Wiley (left) helps Bunny Grant bandage his hands before the start of a workout in 1964.
1
2

Boys' Town, founded in 1940 by Reverend Father Hugh Sherlock for the young people in Kingston's Trench Town community, is now mourning the recent passing of two of its members who made significant contribution to national life.

Grant won the Commonwealth lightweight title as an Independence gift to Jamaica in 1962. He and his Boys' Town club mate and fellow boxer Percy Hayles were mentors to generations of youth in Trench Town.

A dedicated sportsman, Brown played football and cricket for Boys' Town. He represented Jamaica Youth Cricket team in 1966 and toured Barbados and Guyana. He was a left arm batsman and bowler.

He also attended Vere Technical High in the 1960s, where he participated in football and cricket. He was the cricket captain at Vere when they won the Headley Cup cricket competition and was a member of the All-Headley Cup Team. He also represented the Jamaica Under-19 football team, while attending Vere.

According to a release from Boys' Town, it was in football that he left his legacy. Brown played for Jamaica and became a pioneer in playing professionally in the USA Professional League.

In its release, Boys' Town, while extending condolences to the families of both men, hailed them as two who have made significant contributions to national development.