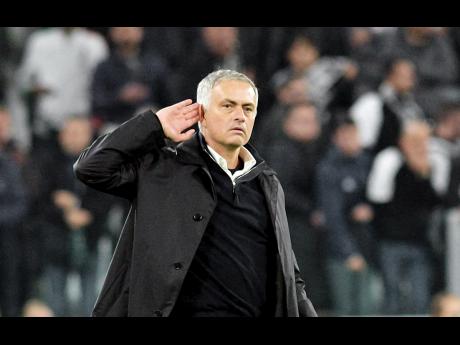 After listening to taunts from the Juventus crowd for 90 minutes, Jose Mourinho couldn't help but pay them back in kind. Mourinho had to be escorted off the pitch yesterday after celebrating Manchester United's 2-1 comeback win over the Italian side in the Champions League by cupping his hand to his ear to the crowd after the final whistle.

The gesture sparked a small altercation with Juventus players that overshadowed one of the most important results of the season for United, who have struggled domestically, but now have a great chance of reaching the knockout stage in Europe.

"I came here to do my job and I was insulted for 90 minutes," Mourinho said. "I wouldn't do that gesture again, but I don't think I offended anyone and at the time it seemed like the appropriate response to those who had insulted all my family, apart from my Inter one too."

Mourinho is unpopular among Juventus fans after managing bitter rivals Inter Milan for three years. After United's 1-0 loss to Juventus at home two weeks ago, he responded to the goading of the Italian fans by holding up three fingers towards them, denoting the treble of titles Champions League, Serie A and Italian Cup he won with Inter in the 2009-10 season.

This time he had another win to celebrate, after watching his team fight back from Cristiano Ronaldo's spectacular opening goal. Juan Mata levelled with a free kick four minutes from time and Alex Sandro netted an own goal in the final minute.