Chung-Fah remembered as 'legend' and 'icon' 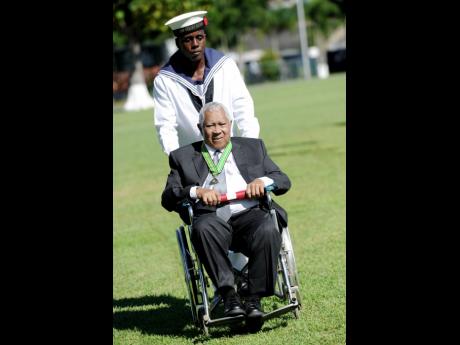 @Normal:Winston Chung-Fah received the Order of Distinction in the rank of Commander for outstanding contribution to the development of Jamaica's football programme at the National Honours and Awards Ceremony on Monday, October 21, 2013.

Chung-Fah had been ailing for a number of years and died at the Promise Hospital in Miami Lakes, Florida.

With notable players such as Lenworth 'Teacha' Hyde and Dennis 'Den Den' Hutchinson among its ranks, Chung-Fah assembled a Clarendon College team, which won the daCosta Cup and the Olivier Shield in 1977 and in 1978. This team is regarded by many to have been one of the greatest schoolboy football teams in Jamaica's history.

"Chungy would have contributed so significantly to the sport of football and would have touched the lives of so many players from way back in the early 70s until he actually migrated," Ricketts told STAR Sports. "Chungy was such an inspiration, not just to the players that he coached, but to every person who had a footballing discussion with him. I remember going to Cayman some years ago with a Clarendon team and Chungy visited us at the hotel. He sat in the room with every single player and staff member and held us spellbound until 4 a.m. just talking to us about football.

"I want to personally, and on behalf of the JFF, offer my sincerest condolences to the family members and to close friends of Winston Chung-Fah."

Chung-Fah was also one of the founders of Santos Football Club, named after the Brazilian club with football legend Pele, his favourite player, represented in Brazil.

Santos head coach Carlton 'Spanner' Dennis describes Chung-Fah as being one of his mentors in life.

"Chung-Fah is somebody who taught me a lot so, most naturally, I'm very distraught because this was a man I looked up to," Dennis said. "We had our differences but respect is respect, and I respected him.

"I remember when we were young and he had the International Restaurant, on Barry Street (in downtown Kingston), all of us would go there and him father would say: 'Bwoy, you gwine give away the restaurant'. Wi could have wi lunch (free) ah daytime until wi could buy it. So he was part of our life and that's why I am keeping this club going because people like him and Jackie Bell have done wonders for my life. So I have to give back something. I owe it all to both of them."

Chung-Fah received the national Order of Distinction, Commander Class, in 2013 and also FIFA's Order of Merit. He was 78 years old.