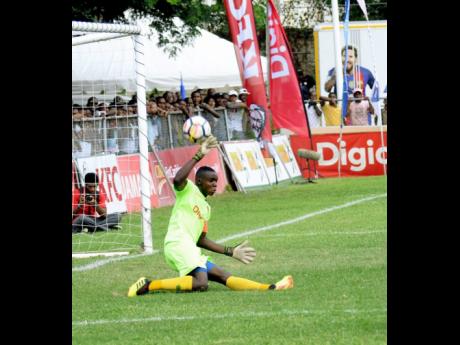 St. Andrew Technical's Goalkeeper Jeadin White leaves his goalline to make a save from a shot by Emelio Rousseau of St George's College during their ISSA/Digicel Manning Cup encounter at Winchester Park earlier this season.

National Under-20 goalkeeper Jaedin White said he was so torn up after learning of his school's 5-0 defeat in the ISSA Champions Cup quarter-final to Jamaica College on Friday that he broke down and cried.

White, who has been the rock behind St Andrew Technical High School's (STATHS) rise to prominence in local schoolboy football over the last two seasons, has only fives goals let in all season, while his team has leaked seven in three games without him.

On learning that his school conceded five unanswered goals in the island's premier schoolboy knockout tournament while he was away on national duty at the Concacaf Under-20 World Cup qualifiers was too much for the outstanding goalkeeper, who intends to apologise to his teammates for what he termed as "letting them down".

"After we (Jamaica U-20) played the game [on Friday] and I went to check my phone for something and I got the chance to see the score and [saw] we were under three-nil, from that moment, my head started to tear (hurt), and when I went back to my room I started to cry because I felt as if I let down my team. As the captain, I should have been there when they needed me the most. So it's very disappointing; even now, I am upset. So when I get back to school, I might have to apologise to my teammates for not being there for them," White told STAR Sports after the Under-20 team returned from the United States on Sunday.

However, he thinks his return will be a mental boost for the team and is very confident, they will rediscover their true form and chart a course to their first Manning Cup title in 31 years.

"I think it (his return) is going to be a mental boost for them, knowing that I am back and I will not be leaving again until the end of the season. This might give them the boost they need and the extra belief they usually have when I am there. So, we just need us to look past the last game.

"But it has been hard, even for me, to look past it because travelling here (back home), it has been on my mind and I can't believe it happened. It's going to be rough for us, but it just takes a lot of talking and getting together as a team, so now is the time we need to be strong together," he reasoned.

He added that his first international tournament was a great experience.

"It was a good experience for me. This was my first time playing in a tournament normally; when I go away with the senior team, it is just to play a single match. It was a really good experience. I really enjoyed it, and I am looking for more tournaments to attend with this team, and hopefully, we can be more successful."