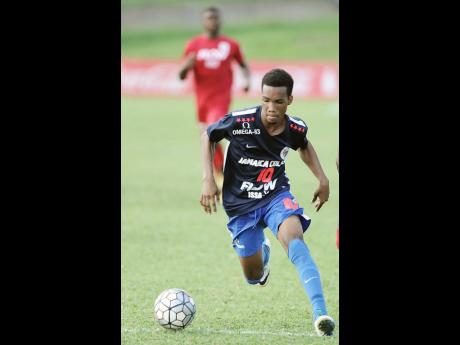 Following his outstanding performance at the recently concluded CONCACAF Under-20 World Cup qualifiers, Tyreek Magee is looking to make the transition to the senior national team in the 'short term'.

Magee, Jamaica's talisman throughout the tournament, pulled the strings in midfield, while creating and scoring goals.

"That (national senior team) would be one of my short term goals and if I continue like this it will come through," he said.

He also promise local fans that they can expect a lot more from when he returns his local club Harbour FC in the Red Stripe Premier League.

The 19-year-old, who many call the new Jermaine Hue has, not been the most consistent in a Harbour View shirt in his two seasons with the East Kingston club.

But he seems to have found form again at the Under 20 Championship where scored outstanding goals, including the stunner in the match against Mexico.

"As long as I am fit and focus I don't see anything or anyone stopping me from performing at my highest level in the local Premier League.There will be a lot more you see coming from me," he told STAR Sports after returning from the championship in the USA recently.

The attacker has been singled out my many observer as the U-20 team's main player throughout the tournament, but he insisted that his teammates should be given credit for his display.

"I went into the tournament knowing my team mates have quality and that we can do very well. A lot of people rate the Mexicans over us. But this bunch is a really talented bunch and my confidence was very high with them, so I wasn't fazed by any team.

"Plus my team mates believe in me, so whenever I was free they gave me the ball because they know what I can do. My job was to create chances for the team and I think I did a fairly good job, although I could have done a lot more," he stated.

Like the rest of the team, Magee was proud of the performance but disappointed they did not to make it to the next round after Mexico took the only available spot by virtue of a better goal difference.