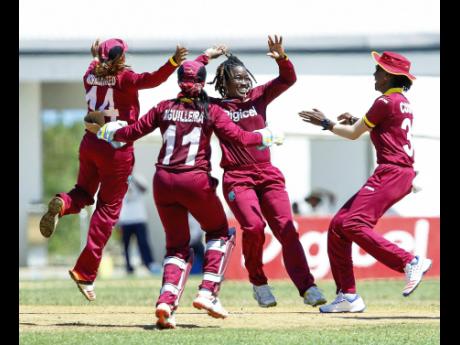 Britney Cooper (right) celebrates the fall of a wicket with teammates during the first ODI between Windies and England at the Trelawny Multipurpose Stadium in 2016. Others from left are: Anisa Mohammed, Merissa Aguilleira and, Deandra Dottin.

CMC – Veteran off-spinner Anisa Mohammed has pointed to her record 100th wicket in Twenty20 Internationals as the highlight of her outstanding career, as she prepares to play her 100th T20I when West Indies clash with South Africa tonight.

The 30-year-old has taken 113 wickets from 99 T20 Internationals and will join teammate Deandra Dottin in the 100 club, once she is named in the XI for the Windies’ second match of the ICC Women’s T20 World Cup at the Darren Sammy Cricket Stadium.

Mohammed made history when she took her 100th T20I wicket in her 81st match two years ago during the successful Windies World Cup campaign in India.

“[The highlight of my career was] definitely the 100th wicket and that was in the last T20 World Cup in India,” Mohammed told reporters here Tuesday.

“It’s nice to be able to play a hundred T20 International games but it would be nice for us to win this World Cup and retain our title. That would be a great achievement for us as a team.”


She added: “Whenever I step on the field I want to give it my best performance. Being able to take a hundred wickets and breaking that record – being the first male or female – it kind of hits you that you can do things that people thought you could never do.”

Mohammed made her debut in West Indies’ first ever T20 International 10 years ago against Ireland in Dublin, but ironically did not bowl a single ball.

However, she has since gone on to take three five-wicket hauls, along with an amazing hat-trick against South Africa last September during South Africa’s tour of the Caribbean.

Trinidadian Mohammed, who has also played over 100 One-Day Internationals, said she had tried successfully to carve her own niche in the international game.

“The girls on this team – we’re just not a bunch of girls who come together from different islands – we’re actually a family and I think that makes it a lot better to go out there and play as a team and that has been working for us.”