Charlemont ready to finish off Petersfield 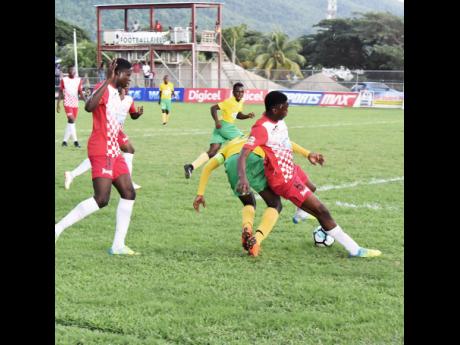 Shackeil Fuller (right) of Charlemont shields the ball from Petersfield High School's Shewayne Barton while his Charlemont teammate, Tajuan Wright, looks on in the final of the ISSA/WATA Ben Francis Knockout Cup at the Juici Patties Park in Clarendon on November 23. Charlemont led 2-0 at half-time when rain interrupted play. 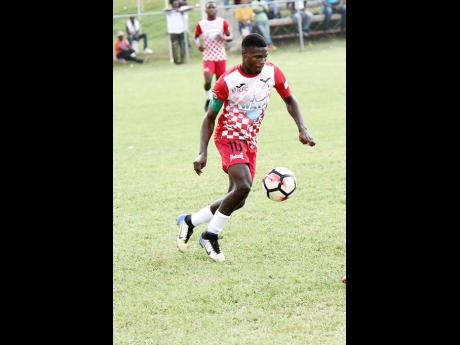 Charlemont coach, Michael Israel, said the entire town of Linstead has high expectations ahead of the second-half of the ISSA rural area Ben Francis Cup knockout final, which had to be suspended after the first half because of persistent rain on Friday at Juci Patties field in Clarendon.

The match is scheduled to continue today at 3 p.m. at the same venue with Charlemont leading Petersfield High School 2-0.

Darren Wildman gave Charlemont the lead after 13 minutes before Howard Barker added a second five minutes later. But heavy rain forced the referees to call off the game at half-time.

However, Israel, said the entire school community and surrounding communities have been brimming with confidence since Friday, as they have not won a schoolboy football title since Dinthill Technical High School won the Dacosta Cup in 1981.

"Everybody in the school and surrounding communities is saying that it is done and dusted already but we will not say that. The game is not finish until the final whistle. Everybody and all the supporters are confident that we can get the job. They expect us to finish what we started.

"So it's much talk about in the area that it has been a couple of years well since a school has taken a trophy to the region. The last school was Dinthill in 1981 when they won the Dacosta Cup. So we want to get a trophy in the area. We have one foot in, so we just have to go out put in the effort and get the trophy up here," he told Star Sports.

But despite their two goal advantage and with only one half to contest, Israel, in not taking his opponent for granted and sees the match as a brand new encounter.

"We expect some level of difficulty. Each game is played on the day, so we are going there to do what we are suppose to do, so we will play our natural game, keep the ball moving and score some goals.