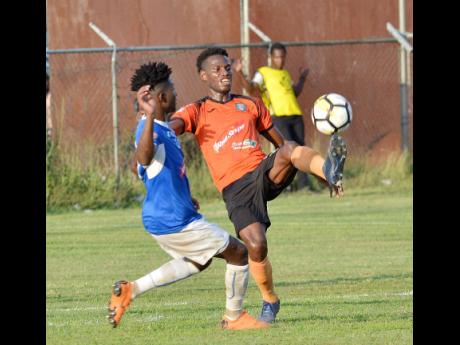 Tivoli Gardens FC's inconsistent form in the Red Stripe Premier League (RSPL) continued yesterday, as after beating Harbour View FC 5-1 in their previous encounter on Sunday, the west Kingston side slumped to a 2-0 defeat against Portmore United at the Spanish Town Prison Oval.

Rondee Smith and Javon East netted first-half goals to give the defending champions a comfortable win in the feature match of the round, and assistant coach Kevon Wisdom said the team's fluctuating form and results has continued to baffle the coaching staff.

"I'm kind of baffled as to why we came out so flat," Wisdom said. "We didn't play well in the first half, we had a very poor 25 minutes. We made some changes to the shape of the team to see how best we could address it and try and get back into the game. But we just didn't lift the tempo of our game to get back in it. It was a lukewarm performance from us," he said.

"I think it is more mental than anything else. But it (inconsistency) is really a concern for us and we have to work on it," he added.

Portmore had the better of their opponents throughout the first-half and they deservedly went in front when Smith struck for the hosts after just 11 minutes. The champions continued to create good opportunities after the opener and five minutes before the break, East added the game's second goal.

"Beating them this time around was important. This is a very important round for us as well as keeping a clean sheet. Not allowing them to play, closing them down and double and triple teaming. For the first balls, second balls we were there and to see this manifest at this stage of the season was very good for us," Portmore head coach Shavar Thomas said.