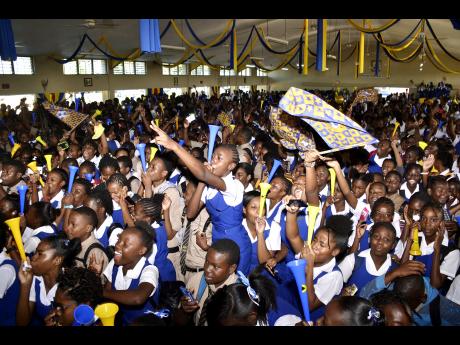 Clarendon College students in jubilation for their football team for which won the ISSA/WATA daCosta Cup with a 2-1 win over Cornwall College at the Montego Bay Sports Complex on Saturday. 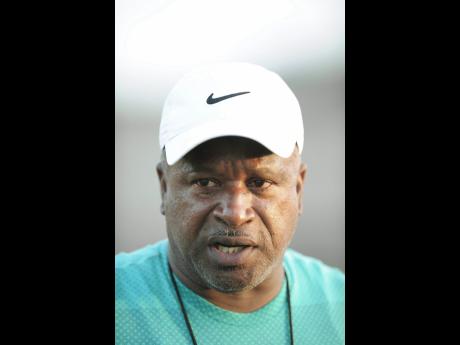 As Clarendon College celebrated their ISSA/WATA daCosta Cup victory over Cornwall College at their Chapleton base in Clarendon, yesterday, amid the frantic and ecstatic celebrations, coach Lenworth Hyde was quietly planning his move on the Olivier Shield title. This, in his eyes, is the real symbol of schoolboy football supremacy.

"We have one more challenge coming up and we have to perform to the best of our ability. We have to approach this very seriously, that's what we did in 77. We want to replicate that, so we are looking forward to it," he said.

"It will be a tough one, but it is very important for us. This will show who is the all-island champion, not the Champions Cup. The Olivier Shield is the best from town versus the best from rural Jamaica, so I am looking forward to that one," he continued.

Despite many dubbing this a grudge match for the former Kingston College (KC) coach, who was dismissed by the North Street-based school three seasons ago, Hyde insists this is not about vengeance for him. "KC is a good team and Luddy (Ludlow Bernard) is a good coach. I am good friends with Luddy and a lot of the players. It will a fun day and may the best team win," he commented.

Celebrations kicked off inside the Stuart Hall, the school's auditorium, at approximately 8 a.m. Excitement inside Stuart Hall was high as students filled the air with the sound of vuvuzelas, and things reached fever pitch when the players entered the auditorium.

After leaving Stuart Hall, the team paraded the trophy through Chapleton and made stops in the town square and celebrated with members of the St Paul's Early Childhood Institution. Then they moved on to the Chapleton All-Age School and the St Robert Bellarmine Prep School, before parading to Summerfield and back to the school grounds.

School principal, Lilith Wilson, said the past students support was invaluable to their success and that the school is putting things in place to ensure the trophy stays in Chapleton. "They have done so much and this is the best past students association I have seen," she said.