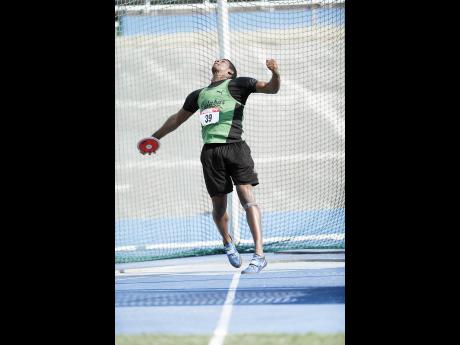 AFTER finishing second for the past three years among the females at the ISSA/GraceKennedy Boys and Girls' Athletics Championships (Champs), Hydel High School will be hoping to oust defending champions Edwin Allen High School next year for the top spot. The Corey Bennett coached team from Ferry, St Catherine, made an early signal of its intent with a dominant showing at Saturday's Tyser Mills Classic at the G.C. Foster College of Physical Education and Sport.

On a day when Hydel finished 1-2 in most of their events, there were also good results from defending ISSA/GraceKennedy Boys' Cham-pionships team Calabar High School, led by World junior discus champion Kai Chang, who scored a big win in his pet event .

Hydel sprinters were in fantastic form, as they swept all the 200m events in their respective classes, with Taffari Rose leading the way in Class 1 after stopping the clock at 24.98 seconds, ahead of St Elizabeth Technical High School's (STETHS) Winsome Harris, who was second in 25.16 seconds, while Janelle Campbell of St Mary High took third in 25.89 seconds.

Hydel swept the top three places in Class 2, where Oneika Wilson came out on top in 25.97 seconds, ahead of teammates Shaneya Swaby, second in 26.16 seconds, and Aaliyah Dixon, third in 26.34.

Hydel took the two top spots in classes 3 and 4. Oneika McAnuff stopped the clock at 25.16 seconds, ahead of teammate Aaliyah Baker, who clocked 25.36 seconds in Class 2. In Class 4, Rohanna Sudlow clocked 25.92 seconds for first, ahead of Taiefa Gowe, second in 26.07 seconds.

Following his success this past summer at the IAAF World Under-20 Championships in Tampere, Finland, where he grabbed gold in the discus, Chang started his campaign on a winning note after taking top spot in the event in Class 1 with 57.76m. He got the better of Petersfield High School's Daniel Cope, who placed second with 49.47m. Chang's teammate, Zachary Dillon, was third with 48.41m. Chang had earlier finished third in the shot put with 16.74m, behind Petersfield's Courtney Lawrence, 18.32m, and Calabar's Cobe Graham, second with 17.36m.

After their outstanding form at Champs earlier this year, Calabar's duo of Kenroy Venson and Rivaldo Marshall continued from where they left off in the Boys' Open 5000m. Venson won the event in 15:37.52 minutes, ahead of former STETHS standout Jauavney James, second in 16:07.17 minutes, as Marshall ended third in 16:12.94 minutes.

JC's Christopher Scott came out on top in the Class 3 200m in 23.17 seconds, ahead of Ferncourt High School's Derrick Grant, second in 23.28 seconds.