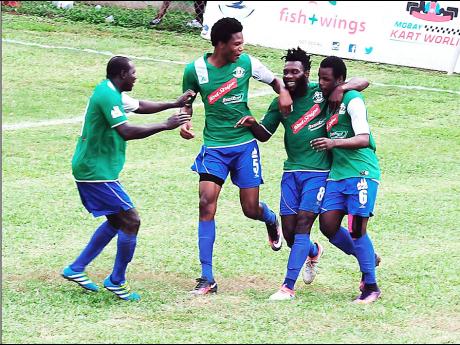 Jourdaine Fletcher (right) celebrating his debut goal with his Montego Bay United teammates in their 2-1 win over Waterhouse FC in the Red Stripe Premier League at Wespow Park in Montego Bay, St James, on Sunday, January 8, 2017.

Since leaving Cornwall College as the top schoolboy footballer of 2017, Jourdaine Fletcher has had several run-ins with football authorities and administrations that have overshadowed his ability to score goals and be an inspiration on a football pitch, leaving many to question his commitment to the game and his ambitions as a player.

But the 20-year-old, who was his team's best player by a long shot against Dunbeholden in their 2-1 defeat at Royal Lakes Complex on Wednesday, insists that the perception people have of him not being focused on his football career is not true and that there is more than one side to that his story.

"This is just because I went to school overseas (and had issues), and the incident when I was in the national team and they were saying that I was missing training and all these things. But people can always talk. I know what I want and I know what I do best, so I just leave the people to talk.

"I know what I want and there are two side to a story, and they (critics) only got one, so I am just doing what I know I got to do," he told STAR Sports.

Against Dunbeholden on Wednesday, Fletcher played a confident game and his left foot still strikes the ball with venom and deadly accuracy. But the striker who has scored just once this season, believes he is lacking the support in midfield that can really provide him with some quality balls in the final third.

"In training, all I need to do is practise finishing some more; and in the games, I need to stick more on the last defender and stop coming deep for the ball. But why I come deep is because I don't really have anyone to play me the ball on the run, so that's why I tend to come deep.

"Premier is not really tough, but in schoolboy league I had someone who could produce the balls for me, and that's Peter-Lee Vassell. So it was easier (to score) then. But now I don't have anyone to provide me with the ball, so all I do is come deep. And when I come deep, I have to play the ball and run to get into position, and that is really hard.

"So I am waiting until January transfers door to open. So by January, I will start getting some goals for sure, because there are more players coming in. So I will get more goals," he stated.

"I have scored only one goal. I'm just going through the drought right now. I know I can more than step up for this team, but we need players, and with better players we will get more goals," he said