Vassell off to MLS Combine 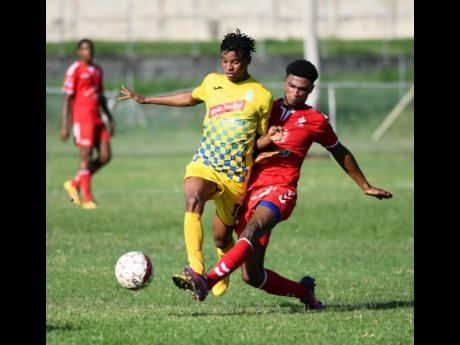 Harbour View's Peter-Lee Vassell (left) tries to get away from UWI FC's Patrick Brown in their Red Stripe Premier League opener at the UWI Mona Bowl on Thursday, September 20, 2018.

Vassell, who departed the island yesterday morning, was the only player selected from the MLS Jamaican Showcase held recently at the Edward Seaga Sports Complex in Tivoli Gardens, West Kingston.

The 20 year old has been arguably the most talked about local player over the past two year as his performances with Harbour View in the RSPL and for the Reggae Boyz has impacted the teams' success.

Jureidini is confident Vassell will do well.

"We are happy for him. It is a great opportunity. A lot of our players have been through that route so it is good that he is recognised enough to be invited and looked at. We are confident he will do well, but we just have to see how it goes in the next week or so," said Jureidini.

"Essentially his talent, positive attitude and his executing given the different environments and stages. He is progressing well and we hope he continues to going forward in his career."