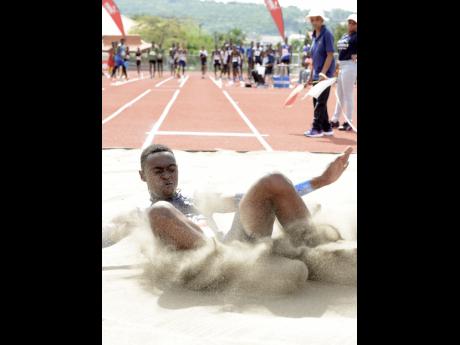 Safin Wills of Jamaica College leaping to 7.29m at his school's track and field meet on Saturday January 5, 2019. He won the event with a jump of 7.40m. 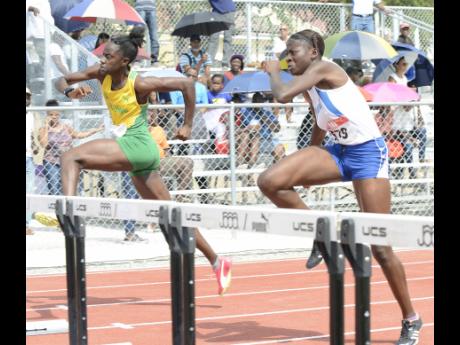 Rosealee Cooper (left) from St.Jago high and Taffara Rose (right) from Hydel both in total concentration as they hurdled the 10th hurdle in the class 1 girls 100m hurdles at the first track and field meet of 2019. 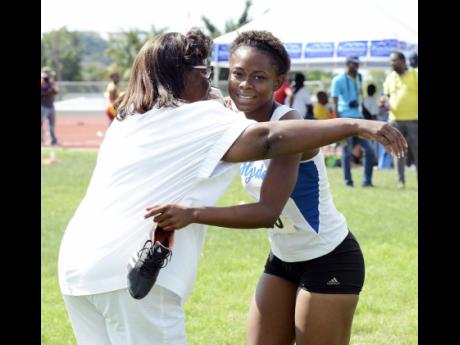 Gizel Clayton (right) from Hydel High school gets a hug from her Principal Hyacinth Bennett shortly after she won her heat in the class two girls 100m hurdles at Jamaica College on Saturday. 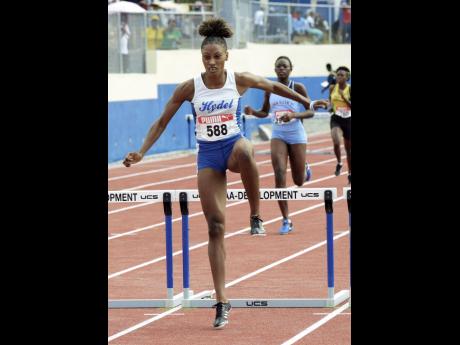 Cherakee Young from Hydel winning her heat in the class one girls 400m hurdles at the Pure Water Jamaica College Track and Field meet at the School on Saturday January 5, 2019.
1
2
3
4

Warren Blake, president of the Jamaica Athletics Administrative Association, and Michael Dyke, head coach of the outstanding Edwin Allen High track and field team have hailed the installation of a synthetic track at Jamaica College.

Speaking on Saturday at the JC Invitational, Doctor Blake said the new facility has established a gold standard. Dyke believes it will help Jamaica enhance its track and field even more.

"It's really good and the coaches have responded by sending their athletes in their numbers", Blake said as he observed what appeared to be a large entry of competitors at the meet on Saturday. "It meant that the Excelsior meet has seen a dwindling in their numbers", he compared with reference to the Ted Dwyer Memorial at Excelsior High which was staged on the same day, "but people want to compete on synthetic surfaces.

Enhance our track and field

Dyke had the same opinion. "This is an excellent facility", he praised. "I wish I could take it back to Edwin Allen, but I am very happy for JC and for the country, because I think now we have another facility which will even help to enhance our track and field even more going forward", said the man who has led Edwin Allen to five straight Boys and Girls Championships and six overall.

Blake envisions the restoration of the track at Catherine Hall in Montego Bay and says a new track at Kirkvine, Williamsfield could be next. Asked when work would begin in Montego Bay, he reported, "I can't tell exactly when, but I know SDF has put it in their budget for the upcoming financial year so I'm hoping that the work will begin sometime this year because it's really a shame that there's no track in the Western end of the island."

The Western Relays, staged annually in Montego Bay, is moving again to the GC Foster College for Physical Education and Sports. A December release from the meet organisers cited 'the poor condition of the track at the Montego Bay Stadium'.

He also foresees the laying of a track at Kirkvine, which will stage its development on January 12. "We had spoken about getting something at Kirkvine so we're still going to be working on that, because we feel a track is needed at Kirkvine", said Blake.

"We need several more tracks across Jamaica, if truth be told", he continued, "but we have to do them in phases."

With the wide gap between Montego Bay and the track at the GC Foster College for Physical Education and Sport in focus, Dr Blake indicated, "So Kirkvine would be the next one, then you have to look at a place like St Elizabeth Technical."