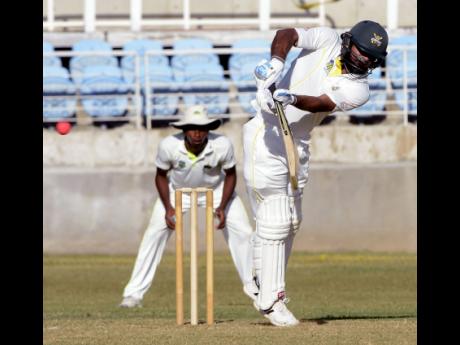 A change of coach did not result in a change of fortunes, as the Jamaica Scorpions, for the second game in a row, found themselves on the receiving end of a defeat in the Regional Four- Day Competition.

The hosts this time suffering a five- wicket loss against the Windward Islands Volcanoes at Sabina Park and coach Robert Haynes will have his hands full over the season if he is to lift the standard of a Scorpions team that is simply not playing well.

Nikita Miller has signalled that his days representing the Jamaica franchise are numbered, and those running Jamaica's cricket must now be having visions of further dark days ahead. Without Nikita Miller, the bowling attack appears to have a lot of bark but no bite, especially now that the franchise's top pacer over the last two seasons Derval Green is out injured.

When the Volcanoes were asked to chase down 287 to win, very few people thought the Scorpions would lose. However, for once, Miller was kept at bay, taking only one wicket in over 30 overs. A few dropped catches did not help, but generally the Volcanoes batsmen played Miller well.

While Miller was having a quiet game, it was expected that the others would step up. The two new ball pacers, Reynard Leveridge and Oshane Thomas bowled at times with real hostility, but both were too often on the short side. Rovman Powell, who is at best useful as a seamer, got 5 for 22 in the first innings and a further two in the second, essentially by pitching the ball up and getting a little movement.

It wasn't just the bowling and fielding that failed to live up to expectations for the Scorpions.

Being dismissed for 210 and 189 tells a story of a batting line-up that is still struggling to impose itself.

Assad Fudadin top scored in both innings with 82 and 48 runs, respectively, and apart from a watchful 52 from Chadwick Walton in the first innings, no other Jamaica Scorpions batsman made a half century.

To their credit, the batsmen generally tried to bat a little more responsibly than the shambolic 65 they made against the Barbados Pride, but their inability to concentrate for long periods and difficulty in turning the strike over, continues to plague the team.

The Trindidad Red Force is their next opponent, at Sabina Park this weekend. If the Scorpions do not get their act together, they could face the ignominy of a third consecutive defeat in the competition.

A Athanaze not out 23