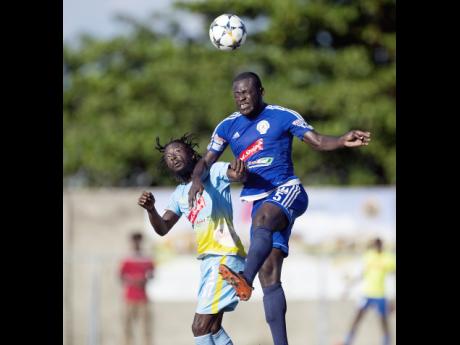 Having suffered their second consecutive defeat since the start of the year in the Red Stripe Premier League, Waterhouse FC head coach Marcel Gayle said he is not too concerned about his team's dip in form.

Waterhouse's latest defeat came against hosts Mount Pleasant FA yesterday when they were beaten 2-0 at Drax Hall. Daniel Green, in the first minute, and Suelae McCalla in the 63rd, were the goal scorers for Mount Pleasant, who were recording their first win in their last five matches.

Gayle, whose team was beaten 1-0 by Cavalier in their Monday night fixture, said they played well, despite the defeats in both matches.

"It is football and sometime you get a little (bad) patch," Gayle said. "I don't think my players played badly, but I think we can play a little better and I think our concentration was again lacking here because we gave up a goal in the first minute of play."

Mount Pleasant assistant coach Nigel Stewart, who is charge of the team while head coach Donovan Duckie serves a three match ban for comments made about match officials, said they are very happy for the victory.

Green gave the hosts a dream start when he arrived at the post to tap home a cross from Cardel Benbow. However, Waterhouse striker Rafiek Thomas came close to giving his team the equaliser 10 minutes later, but his shot from 12-yards went high over the crossbar. Waterhouse were reduced to 10 players on the stroke of half time when midfielder Keammar Daley was sent off after picking up a second yellow card. Mount Pleasant took advantage as they wrapped up the match when McCalla fired home a powerful 25-yards shot against the run of play.