Scorpions in control against Red Force 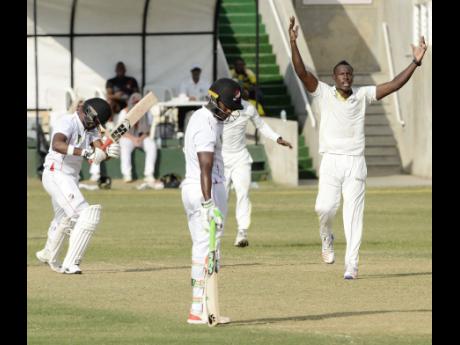 Darren Bravo made his long-awaited return to the Cricket West Indies Professional Cricket League 4-Day Championship yesterday, but a damp pitch that led to a lengthy delay ruined the occasion and helped Jamaica Scorpions grab the upper hand over Trinidad & Tobago Red Force.

Bravo made just 17, but the Scorpions exploited a damp Sabina Park pitch to leave the Red Force wobbling on 135 for seven when bad light stopped play on a truncated first day of their fourth-round match with left-handed Yannic Cariah not out on 22 and Khary Pierre not out on 16.

The 29-year-old Bravo would have been relishing his return to the regional scene for the first time in nearly three years, following an impasse with CWI which also left him sidelined from the international stage for the last two years.

Instead, he and the rest of the Red Force batting were left to battle against a keen Scorpions attack on a pitch that appeared to be affected by rain in the Jamaica capital of Kingston the previous day.

Play started on-time and Red Force suffered the loss of Test batsman Kyle Hope caught at slip off Oshane Thomas for two in the first over of the match.

The dismissal of Jeremy Solozano however, caught at backward point off the same bowler in the fifth over, prompted a delay of around four hours, due to the pitch.

Failed to find any stability

On resumption, Bravo and Jason Mohammed battled for close to an hour, sharing 34 for the third wicket in the best period of the day for visitors.

Bravo struck a couple of boundaries from 51 balls in close to one and a half hours at the crease before he was adjudged lbw to a delivery Rovman Powell that jagged back from outside the off-stump.

After his dismissal, Red Force failed to find any stability and slumped to 94 for seven, as four wickets fell for 30 in the space of 54 deliveries.

Pierre came to the crease and with Cariah batted through 35 minutes before stumps were drawn to put on an unbroken 40 for the eighth wicket.

Powell ended the day with three wickets for 30 runs, Thomas took two for 21 and left-arm spinner Nikita Miller two for 41.

Bravo was one of two changes to the Red Force line-up along with Jamaica-born, former Windies Under-19 fast-medium bowler Odean Smith. They replaced leg-spinner Bryan Charles and Windies fast bowler Shannon Gabriel.

Red Force are fifth in the six-team standings on 10.2 points -7 a mere 0.4 ahead of Scorpions.

I Khan b Miller 7

A Phillip, D StClair yet to bat