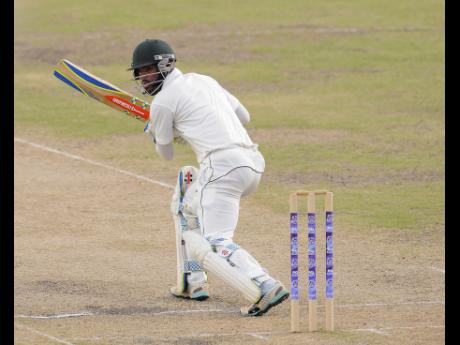 Jamaica Scorpions opener John Campbell has been named in a 13-man Windies squad for next week's first Test against England at Kensington Oval in Barbados.

It is Campbell's first call-up to the regional Test squad. The 25-year-old had a productive season for the Scorpions last year, gathering 603 runs at an average of 43, before also averaging 37 for Windies A in the two four-day Tests against the Indians.

He has been less impressive this season. He opened with a half-century against Barbados but has managed only 40 runs in three innings since.

Trinidadian Darren Bravo is also in the 13. He ends a 27-month exile from Test cricket. The left-hander is one of several changes to the squad which suffered an embarrassing whitewash in Bangladesh last November.

Batsmen Kieran Powell and Sunil Ambris, along with leg-spinner Devendra Bishoo have all been axed, while regular captain Jason Holder returns to lead the squad after missing the tour of Bangladesh through injury.

The selection of the 29-year-old Bravo brings to an end a bitter saga which had dragged on ever since he was sent home in November, 2016 for an ill-advised rant aimed at Cricket West Indies president, Dave Cameron, and which led to an acrimonious stand-off with the regional board.

The 22-year-old Joseph, meanwhile, has also found his way back into the squad after playing his last Test 18 months ago but there seems to be lingering concern over his fitness, with 21-year-old Jamaican speedster Oshane Thomas called up as cover.