Pelicans' Davis on fire in LA 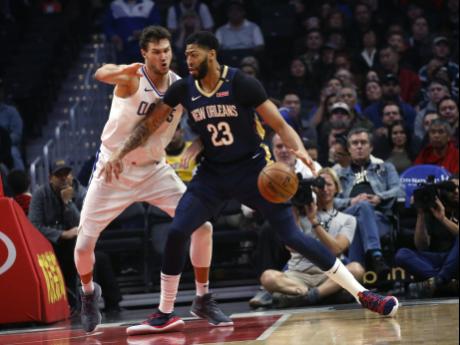 Anthony Davis missed his first five shots and scored just four points in the first quarter, announcing to his teammates on the bench that he was well below his best.

They didn't think so and they were right.

Davis finished with 46 points and 16 rebounds, Julius Randle scored 27 and the New Orleans Pelicans recovered after blowing a 20-point lead in the second half to defeat the Los Angeles Clippers 121-117 on Monday night for just their second road win this season against a Western Conference team.

"I was missing some easy shots, but that doesn't discourage me. I just keep shooting the same shots," Davis said. "Once I was finding the rhythm they told me to go get the ball."

Davis and Randle combined to score 24 of their team's 28 points in the third quarter, when the Pelicans stretched their lead to 20.

But the Clippers chipped away, outscoring New Orleans 15-2 over the final 4.5 minutes to close to 94-88 heading into the fourth. And they weren't done yet.

Danilo Gallinari hit a 3-pointer off an inbounds pass from Patrick Beverley with 0.3 seconds left on the shot clock. Gallinari got fouled and made the free throw for a 101-100 lead, completing a 13-6 spurt that opened the quarter.

New Orleans quickly snatched the lead back. Darius Miller made a 3, launching a 15-6 run that included threes by Davis and Holiday and put the Pelicans back in front 115-106.

Davis made all 12 of his foul shots in the game, including four in a row to close it out.