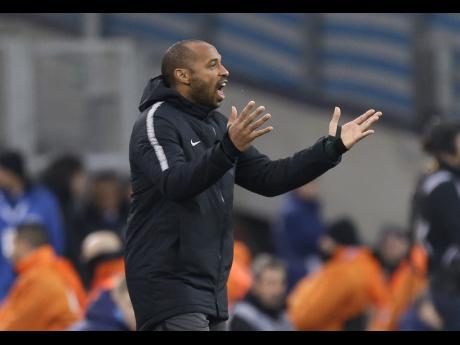 Winger Allan Saint-Maximin put Nice ahead in the 30th minute and 17-year-old defender Benoit Badiashile equalised shortly after halftime, becoming the youngest scorer in the French top flight this season. Badiashile's header from a corner was deemed to have crossed the line by the use of goal-line technology.

Henry and Vieira are in their first seasons coaching in France, but they go way back and hugged warmly before kickoff.

Living next to each other in London, they blossomed with Arsenal and were part of the famed "Invincibles" side which went a whole season unbeaten in the English Premier League. The Frenchmen also won the 1998 World Cup and the European Championship in 2000, as well as playing together in the 2006 World Cup final.

Having started their illustrious careers as teenagers on the French Riviera Henry with Monaco and Vieira with Cannes they have come full circle as coaches.

Monaco had chances through Aleksandr Golovin and Rony Lopes, only for Nice to strike against the run of play following a sloppy mistake from Youssef Ait Bennasser. After he gave the ball away in midfield, Saint-Maximin took it off him easily and shrugged off defender Jemerson before shooting confidently past goalkeeper Diego Benaglio.

The goal was awarded before being checked and confirmed by referee Benoit Bastien using the Video Assistant Referees (VAR). Moments before the interval, he consulted VAR again to send off Nice striker Ihsan Sacko for a late challenge on defender Benjamin Heinrichs.

"There's a lot of frustration and questions about the decisions. The red card is very harsh," Vieira said. "It wasn't a dangerous action and it had a negative impact on us."

Bastien used VAR for the third time to award a penalty in the 75th, ruling that Badiashile impeded right back Youcef Atal when images suggested Atal initiated contact with Badiashile before tumbling down.

Benaglio guessed correctly to keep out Saint-Maximim's spot kick. Monaco almost won it near the end when Radamel Falcao hit the post with a curling effort.

"A point isn't enough for us, but we could have been sat here talking about a defeat," Henry said. "I have no opinion about the VAR, those are their decisions. Diego saved the penalty so much the better for us."

Monaco have not won at home this season and are 19th only one point ahead of last-place Guingamp, who beat Rennes 2-1 at home.