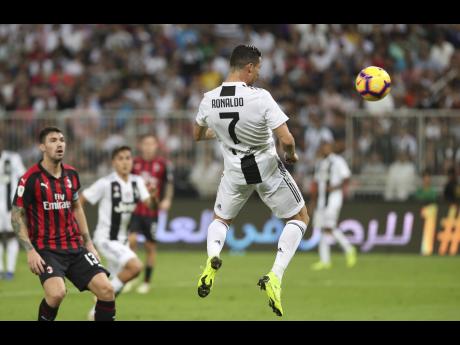 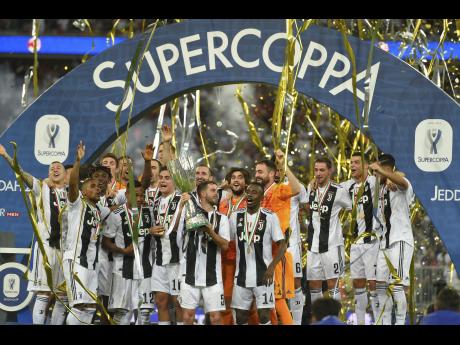 Amid a background of protests and political outrage, Juventus beat 10-man AC Milan 1-0 in Saudi Arabia yesterday to win the Italian Super Cup for a record eighth time.

Cristiano Ronaldo scored the only goal of the match to win his first trophy with the Italian team.

"I'm very happy, it was what I wanted, I'm very happy to have won my first title with Juventus," Ronaldo said.

It was Ronaldo's fourth goal in his past four matches as he shows little sign of being affected on the pitch at least by a case of alleged rape involving an American woman.

Ronaldo has been asked by police to provide a DNA sample in an investigation of the allegation by Kathryn Mayorga, a former model and schoolteacher, that he raped her in his Las Vegas hotel penthouse in 2009 and paid her to keep quiet. Ronaldo has denied any wrongdoing.

Juventus, who have won the league the past seven seasons, lead Serie A by nine points and are in the quarter-final of the Italian Cup as well as the last 16 of the UEFA Champions League.

"We have to take it step by step," Ronaldo continued. "The aim was to start well this year and we have done and now we have to continue to work for our other objectives."

Italian politicians and human rights activists had objected to the game being played in Saudi Arabia, citing the assassination of Washington Post columnist Jamal Khashoggi at the Saudi Consulate in Istanbul.

But the match went ahead at a sold-out King Abdullah Sports City Stadium in Jeddah in front of more than 61,000 fans, including many women who were only allowed into Saudi sports stadiums a year ago for the first time to watch football matches.

Last June, the Italian league announced it agreed to a deal with Saudi Arabia's General Sports Authority for three of the next five Super Cups to be played in the kingdom. The deal will provide more than EU20 million (J$2.9 billion) to Serie A and EU3.5 million (J$518 million) to participating clubs.

"I'm very respectful of all the opinions," Lega Serie A President Gaetano Micciche said. "We've talked about it and we'll talk again. I think it has been useful to open this dialogue, we'll talk about it all civilly and everyone will understand everyone else's positions."