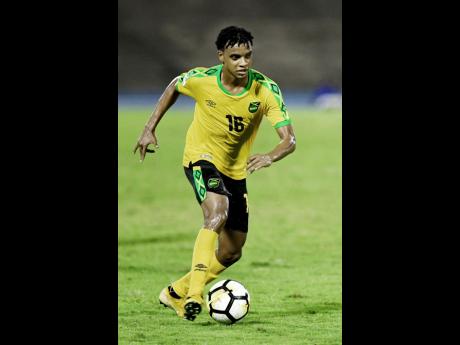 Montego Bay football, which is currently at an all-time low, got some good news earlier this week when word came through that former Cornwall College star midfielder Peter-Lee Vassell had been drafted by the Los Angeles FC to play professional football in Major League Soccer (MLS).

While the 19-year-old Vassell, who is from a family with solid football pedigree, was away from Montego Bay, plying his trade for Harbour View FC in the Red Stripe Premier League (RSPL), his profile remained very high in the western city, which proudly continues to own him.

Many, including his father, former St James Football Association president, businessman Samuel 'Sonny' Vassell, is hoping that his significant breakthrough into professional football will serve as a source of inspiration to the many other young footballers in the parish, who are now facing a difficult passage forward because of the declining state of club football in the parish.

As Peter-Lee and past stalwart like Theodore Whitmore, Durrant Brown, Warren Barrett and Paul 'Tegat' Davis, who have had the distinction of representing Jamaica, have proven, St James has the basic infrastructure to identify and develop talent at the junior level, where the St James/Victoria Mutual Building Society Under-13 competition has been serving as a fantastic nursery.

In fact, it is no wonder that Peter-Lee's dad, who presided over one of the most successful periods in the parish's football, is probably bursting at the proverbial seam with pride, knowing the role he played in pushing junior football in the parish. I can understand his sentiment in saying: "I know he could make it to be a good footballer. They couldn't stop him, that born in him."

While I have not spoken to Peter-Lee's older brothers Andrew and Gary Vassell, who were both fairly talented players, representing Seba United (now Montego Bay United Football Club), I know they must be extremely proud of their little brother, knowing that he has managed to make it to another level, in terms of representing Jamaica and playing professional football.

In expressing his appreciation to those who have helped him along his journey into professional football, young Peter-Lee has rightly acknowledged the role played by former national midfield star Ricardo 'Bibi' Gardener, who coached him at the National Under-20 level and at Harbour View. I am sure he would probably want to add Hopeton Gilchrist and Dr Dean Weatherly, who were both pivotal in his earlier development, to that list.

While I would love to see St James club football return to the days when we were churning out star players like Winston 'Twinny Bug' Anglin, Hector Wright, Steve Malcolm, Noel 'Bram' King and Allie McNab, dime a dozen, based on the current tame structure in the parish, I would urge the talented youngsters with professional aspiring to begin to look outside the parish and not to become stagnated.

In fact, like Peter-Lee and Portmore United's midfield star Ricardo Morris, I would urge these youngsters to start looking at clubs like Harbour View, which is providing to be a very good pipeline into professional football. Like it or not, this club's track record is probably second to none in Jamaica in that regards.

While Peter-Lee was probably slightly ahead of some of his team-mates on the successful 2016 Cornwall College daCosta Cup team, the disparity was not so wide that some of his teammates could not also follow him into the professional ranks. In fact, I would urge some of them to immediately begin to re-examine their options with regard to looking elsewhere to advance their careers.

To be frank, it would be my absolute joy to hear more respected voices like Los Angeles FC's coach Bob Bradley saying: "He is a good footballer. I am excited to work with him," about other players than the obviously talented Peter-Lee Vassell, who I have every reason to believe will make us proud.