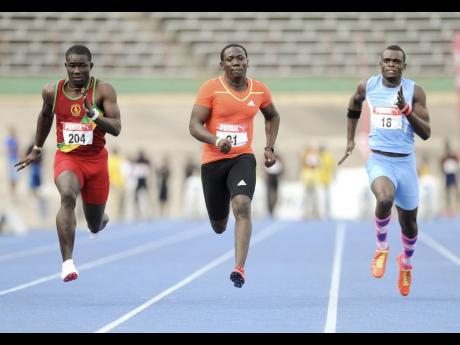 Jazeel Murphy (center) competing in the 100m sprint at the Carifta Trials on Saturday, March 2, 2013.

OVER the years, Jamaica has produced some very outstanding male athletes at the junior level but most of them have failed to step up to the seniors. One of these is former Bridgeport High athlete, Jazeel Murphy, who was a standout at the ISSA/GraceKennedy Boys and Girls' Athletics Championships (Champs) between 2007 and 2012.

Murphy who will celebrate his 25th birthday next month, was a cut above his rivals, and it was no surprise when he won the 200m in his final year in Class 3 at Champs, following up the next year by taking the sprint double in his first year in Class 2. He also won the 100m in his first year in Class 1, where he defeated former St Elizabeth Technical standout Andrew Fisher, before finishing second in his second year in the Class, behind Munro College's Delano Williams. Murphy, whose impressive performances led to him being dubbed 'Jamaica's next big thing,' did not compete in his final year in Class 1, as he decided to become a full-time athlete at the Racers Track Club under the tutelage of renown track coach Glen Mills.

Murphy also had success competing for Jamaica at the Carifta Games, where he won the Under-20 100m in 2011 and 2012, and took the sprint double in 2009. The year 2012 was indeed a special year for him as he went on to finish fifth at the IAAF World Under-20 Championships in Barcelona, Spain, where he produced a personal best time of 10.25 seconds. Since that performance, Murphy's career has been derailed by injury and fitness issues. But now, he says his sights are firmly set on next year's Olympic Games in Tokyo, Japan.

"At present, I am in training with my former coach, Carl Page, and my preparation is for the Tokyo Olympic Games, as I am confident that I can get back to my best," Murphy said.

Last year, Murphy only competed twice with his best effort coming at the Camperdown Classics, where he won his 100m heat in 10.51 seconds, this was a tenth of a second better than his season's best in 2017. "That race was used to see how my body felt after so many injuries and after feeling a little pain, we decided to shut it down and instead let the healing process continue and focus on the Tokyo Olympics," he said. "This year, the real preparation will start, as I will do a few races, in the meantime, to try and lower my time."

Although they say hindsight is 20-20, Murphy looks back at his decision to go professional in his final year with regret.

Page, who first conditioned him when he entered Bridgeport, is now behind his preparation, agreed that it was a mistake by his charge not to compete at Champs in his final year of eligibility. Page also rues Murphy's decision to live on his own, as it led to poor monitoring of his diet and issues with his weight. "He went to live in an apartment with other members from the club and there was no parental supervision there," Page said. "He mostly fed on junk food, which definitely affected his diet, which continued to play a part with his injury. Also I was taken out of the picture as his coach after he went to Barcelona, as I was responsible for his preparation going to the championships,".

Page thinks Murphy can get back to the top, but there are several things he needs to do. "Jazeel has the potential to get back to the highest level, but first he will have to change his attitude from the one he had when he went to Racers . "He used to miss several training sessions, including gym work, and his eating habit was poor. At the same time, he was pressuring himself mentally thinking about his injury."