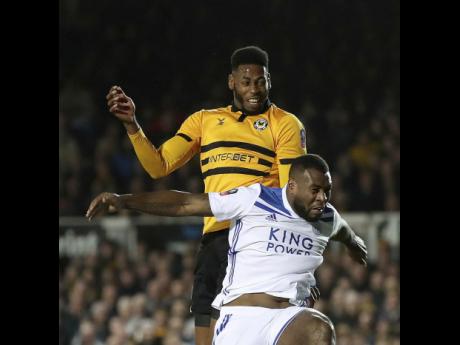 Jamaican striker Jamille Matt notched his 15th goal of the season, as Newport County edged Exeter City 1-0 in an English League Two match at Rodney Parade on the weekend.

It was Newport's first league win since November, although the Welsh club sprang a major surprise when they knocked out 2016 Premier League champions Leicester City in the third round of the FA Cup earlier this month, when Matt was on target with an early header in the 2-1 win.

Matt broke the deadlock in Saturday's match with a close-range finish in the 71st minute to give manager Mike Flynn's side a lift ahead of next Saturday's FA Cup fourth-round trip to Championship outfit Middlesbrough.

Meanwhile, Bermudian striker Jonte Smith scored his 12th goal of the season as third-placed Lewes bounced back to beat lowly Wingate & Finchley 4-2 in a Bostik League Premier Division match at the Dripping Pan after trailing 2-0 just before the hour mark.

Smith scored Lewes' second goal with a 67th-minute penalty, three minutes after coming on as a substitute.