No slowing down - Atkinson 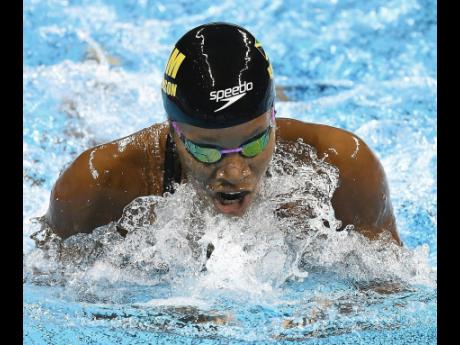 Despite turning 30 years-old last December, 2018 RJRGLEANER Sports Foundation National Sportswoman of the year Alia Atkinson says she has no intention of slowing down and quitting anytime soon.

Atkinson, who left the ceremony, which took place at The Jamaica Pegasus hotel on Friday with three major awards, says she will only continue to pace herself and see how much longer she can compete at the highest level with continued distinction.

"Most people see a career as a mountain and when you reach the top, the only way is down. But my mountain is a horizontal mountain, so I have climbed it and have to ride it. There were a few ups and downs along the way, but I am looking to climb it again," she told STAR Sports.

"I don't know (how much longer I will carry on). After 2016 with all the ups and downs, we decided to take it one meet at a time. Last year, we had Commonwealth Games and then Worlds (short course World Championships) and we have Worlds again this year. So we keep setting new goals after each meet is completed," Atkinson noted.

Looking back at 2018, Atkinson didn't have the best start to her season, but with perseverance and a strong support staff, she was able to overcome the slow start and some doubts to finish the season on a high.

"The year I had got better as it went along. It started out a bit rocky, but I just pushed through it and kept going and it got better," said Atkinson

"I asked myself, should I continue, I am turning 30, there were so many different factors to go around. But I have a team and support staff and they know my goals and helped me get back to it. So I just got back up and got better mentally and physically too I came around," she recalled.

Atkinson, Jamaica's most successful swimmer, has carried the torch of the nation's swimming for the last decade, but in the twilight of her career, she is at least pleased to see a host of young swimmers coming through and looking to make their mark on the international circuit.

"What I am pleased about is that not only do we have young swimmers, we have some in the transitional phase, from collegiate to pro level and we never had that before. Before we had one or two, but now we have a team that is transitioning and I think that is vital with the Olympics," Atkinson said.

"We have to help them and fund them and help drive them to the Olympics, because now we can even have a relay team and we haven't had that since the 80s. So swimming is on the up and everybody needs to jump on board. The vision is there people just need to see it and believe it as well."