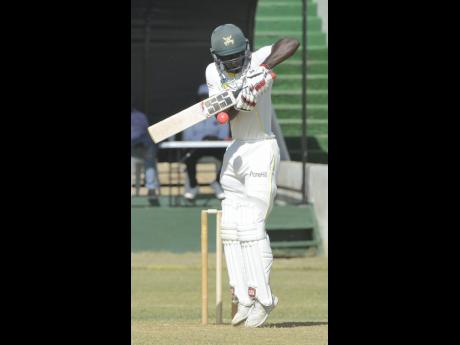 Ian Allen/Photographer Chadwick Walton on his way to scoring 52 runs for the Jamaica Scorpions against the Windward Islands Volcanoes on the first day of a Day/Night match at Sabina park on Friday January 4, 2019.

Chadwick Walton and Brandon King notched half-centuries as Jamaica Scorpions finally broke their losing streak with a convincing six-wicket victory over Windward Islands Volcanoes on the final day of their fifth-round encounter yesterday.

Asked to chase 212 at the Grenada National Stadium, Scorpions produced a measured run chase to pull off a comfortable win in the end, with Walton top-scoring with 79 and Brandon King getting 56.

Barbadian all-rounder Kenroy Williams put on the finishing touches with an unbeaten 36, handing Scorpions their first win of the Regional Four-Day Championship in four outings.

Scorpions started the day well when they finished off the Volcanoes innings with no addition to the overnight total of 198.

With the first ball of the day, left-arm spinner Dennis Bulli removed Shermon Lewis without scoring and Scorpions then made a great start when Walton and Oraine Williams (18) put on 37 for the first wicket.

Left-arm spinner Larry Edward removed Williams to break the stand and Assad Fudadin (10) followed soon afterwards, to leave the visitors on 53 for two.

Walton and King then joined forces to rescue the innings, posting their second 100-run stand of the contest with a third- wicket partnership of 102.

However, part-time off-spinner Tyrone Theophile, who claimed four for 44, hauled the hosts back into the affair, as Scorpions lost three wickets for 15 runs to tumble to 170 for five.

With the match in the balance, Williams strode to the wicket to win the match for Scorpions, putting on a valuable 22 for the sixth wicket with King and a further 20 with Aldaine Thomas (three not out) in an unbroken seventh-wicket partnership.

The 34-year-old Williams, in his second match of the season, struck six fours in a fluent 54-ball knock.