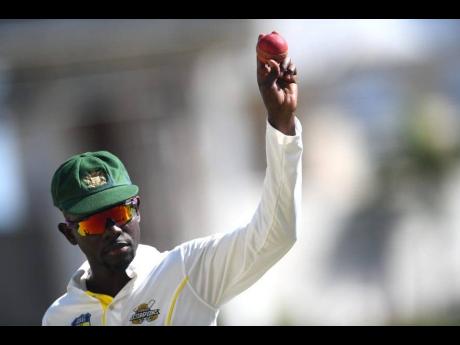 Jamaica Scorpions Nikita Miller holds a Cricket ball after taking the final wicket against the Trinidad and Tobago Red Force. He ended with figures of 7 for 87 in the second innings, on day three of the WICB Professional Cricket League Regional 4 Day Tournament at Sabina Park on Saturday, January 12,2019.

Jamaica and regional ace-spin bowler, Nikita ‘killa’ Miller, says his resignation as Melbourne Cricket Club captain recently, which followed his stepping down as Jamaica Scorpions captain last year, is a result of him being overlooked by West Indies test team over the years.

Miller also believes that at the age of 36, he should be making way for young players and help them make the transition to regional and West Indies cricket.

“I am 36. I have not retired playing for Jamaica but when it comes to four-day cricket, I doubt I am going to go to the next level. Being overlooked all these years, I guess the reasonable thing was to cut down the number of games I play. The number of games I play will allow some person to transition to the next level, and transitioning a person is better when you are there but you have to give them opportunity. Cutting the (Jamaica Scorpions) games means I would not make myself available and as captain and you have to make yourself available for all the games, so I had to step down,” he said.

Miller revealed that his drive to play cricket has had diminished. “When you start playing cricket, the ultimate goal is to play for West Indies and that is out of the picture now at my age. I have been overlooked for years and I can’t see it happening now, and they have guys coming through who they have invested in, given contracts and are working with and I have no problem with that,” he continued.

Although he does not see himself playing first-class cricket past next season, he insists he has no immediate plans to stop playing the other versions of the game.

“I wasn’t given the opportunity I was suppose to and time ran out on that (first class) version. I am still not going to stop playing T20 and 50 overs cricket, but in terms of the four days I don’t think I will end up playing at the highest level. I don’t see why I should continue all that. If I was playing now and again for the West Indies but mentally I am in that space where I can’t just play first-class cricket and be happy playing first-class cricket. That’s not my personality, I am always looking to go further and be the best,” he added.

The St Elizabeth native played just one Test for West Indies but over 50 one-day internationals with an average of 36.88. His regional first-class average stands at 16.54.