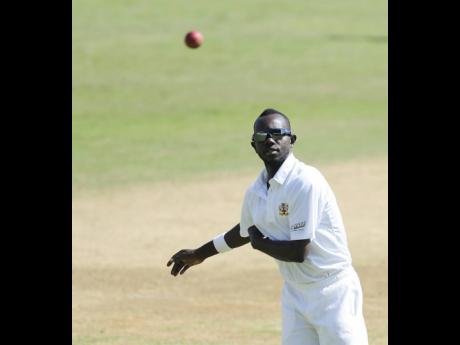 Jamaica spin bowling star, Nikita Miller, said argument that he is a disruptive player and that it has been the main reason why he was frozen out of the Windies Test team, despite his continued consistency at the regional first-class level, makes no sense.

Miller, who has 521 wickets at the regional first-class level at an average of 16.36, and who has played over 50 one-day internationals (ODI) and nine Twenty20 (T20) internationals for the Windies, pointed to a number of reasons as to why that would be far from the fact.

"I heard some people say they want to find the reason why I haven't been given the opportunity, and one of the things I hear is that I am disruptive and a compulsive complainer," he said. "But one question I would ask is am I only a compulsive complainer and disruptive when it comes to four days, but not when it comes to T20 or ODI games, in which I have played over 50 games for the West Indies.

"As recently as the World Cup qualifiers, where I was selected, I was on tour for five weeks and I wasn't disruptive then and that argument didn't come up. I have been to two World Cups and I haven't heard anyone say I am disruptive. I have been on many tours and I have not been summoned to any meeting for being disruptive, and I have never gotten an email saying they need to have a conversation with me because I am disruptive. I don't know where this is coming from, but I don't think people should speculate that that is a reason based on what some else said, it doesn't make sense," he said.

"How would it look for the administration of Jamaica to have a person that is disruptive as their captain? After being on many tours for West Indies and Jamaica, how is it that someone that is so disruptive gets so many opportunities. So it makes no sense when they say that I am disruptive for Test cricket, and that is the cricket I want to play, but yet still they send me on one day tours. It just doesn't add up.

"But I have been on many tours and if they are saying something about my behaviour, there is no truth to that. I can't say why I haven't been selected. I was upset at one time but now I have no ill-feeling towards it or anybody. I am over it and a servant for the game and will offer my best to Jamaica and West Indies cricket," he said.