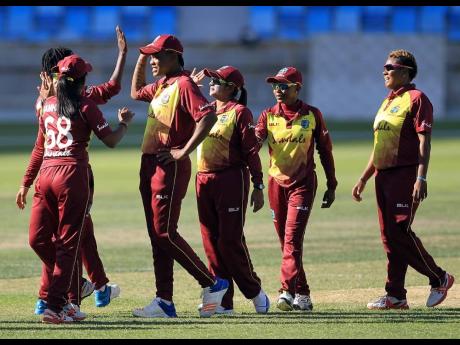 Windies Women celebrate a 146-run victory over Pakistan in the first match of their one- day international series in Dubai, United Arab Emirates, on Thursday, February 7, 2019.

Opting to bat first at the Dubai International Cricket Stadium, the Windies overcame a stumble at the start to post 216 for five off their allotted 50 overs, with the right-handed Dottin stroking 96 off 139 deliveries.

Captain Stafanie Taylor, returning to the squad after opting out of the preceding Twenty20 Internationals in Karachi, scored 58 while Shemaine Campbelle chipped in with an unbeaten 26.

Seamer Kainat Imtiaz led the hosts' attack with three for 49 from her nine overs.

In reply, Pakistan never challenged as Dottin returned with her sharp medium pace to take three for 14 while leg-spinner Afy Fletcher grabbed three for 17, to send the innings tumbling to 70 all out in the 30th over.

Nahida Khan top-scored with 23 before retiring hurt at 46 for one in the 17th over and her departure saw Pakistan collapse quickly, with number 11 Aiman Anwer also unable to bat because of injury.

Dottin had earlier taken centre stage with her 19th one-day fifty as she and Taylor set up the innings nicely for the visitors.

Left-handed opener Kycia Knight laboured 18 balls at the crease without scoring before she was bowled by veteran off-spinner Sana Mir in the sixth over with 12 runs on the board.

But Dottin and Taylor combined in a 143-run second wicket stand which clinically took the game away from the hosts.

While Dottin punched eight fours and two sixes, Taylor counted four fours in a 97-ball knock before she perished in the 40th over, becoming the first of Kainat's three victims.

Dottin followed in the 46th over, agonisingly short of three figures but Campbelle struck two fours in a breezy 30-ball knock to keep the innings ticking at the end.

Fast bowler Shamilia Connell then struck early in the second over to give the Windies the upper hand, when she had Sidra Ameen caught at the wicket without scoring.

Nahida propped up the innings in a 44-run, second wicket stand with captain Javeria Khan (21) before she was stretchered off after taking a blow to the helmet from Dottin.

Pakistan were further set back when Dottin knocked over Umaima Sohail first ball and the innings never recovered as wickets fell steadily.

The second match of the series is on Saturday at the same venue.

S Campbelle not out 26

Did not bat: A Fletcher, A Mohammed, S Selman, S Connell.

Nashra Sandhu not out 0