Campesino gets win in the stewards’ room 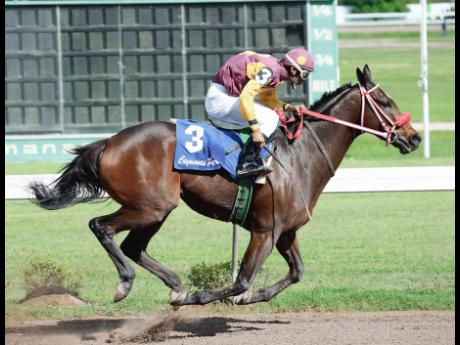 The 2-5 favourite, NUCLEAR FLIGHT, broadsided 5-2 second-choice, PEKING CRUZ, a furlong and a half out, and continued to dart all over the race track whenever Dane Dawkins applied the whip.

CAMPESINO ran on into second place behind NUCLEAR FLIGHT close home, relegating PEKING CRUZ at the wire, leaving the nine-year-old gelding's backers merely awaiting the announcement of the surest disqualification ever.

NUCLEAR FLIGHT's number was taken down with hardly a whimper from her backers and placed third behind PEKING CRUZ, who was awarded second.

CAMPESINO, an unlikely Walker-Philip Feanny combination, won his last race at the exact distance seven months ago, and continues to prove competitive in the top classes at the ripe age of nine.

Walker, meanwhile, had opened the 10-race card with Wayne DaCosta's 1-5 favourite, DRUMMER BOY, and landed his second with UNBREAKABLE, a 3-2 chance for Johnny Wilmot.

Apprentice Christopher Mamdeen edged one win away from five-time former champion rider, Trevor Simpson, landing the second event aboard ALSO CORRECT, taking his tally to 11 winners for the season.

Racing continues at the park on Saturday.