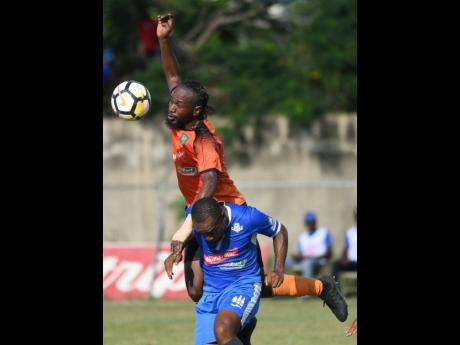 Williams had to watch from the sidelines as players like Venton Evans, Chavaney Willis and Ricardo Morris occupied the midfield. But since the departure of Willis to USL club, Bethlehem Steel, and injuries to Morris and Evans, Williams has been given the opportunity show his qualities as a player in the twilight of his career and he has grabbed it with both hands.

“We know Portmore is an organisation that likes to push youngsters out there in the world so I am just here to guide and help. Whenever they call on me, I am there and I just do my best. But, for me, I think I can play as long as I feel motivated. I will continue to go until I feel to stop. There is no time limit on me playing because it is something that I really love. It is my passion,” Williams told RSPL Rumble after Portmore beat Arnett 3-0 at Prison Oval on Sunday.

Williams, who spent two seasons (2009-2011) at Norwegian Club, Nybergsund, says his love for the game and the experience he gained overseas are the reasons his motivation to continue playing at the highest possible level remains strong.

“I keep my body in good shape, eat right, get rest, stay healthy, have self-confidence, and believe my job. It’s a job that I love,” he said.

“Every player dream to play overseas and I was one of them that got that opportunity. I am grateful for it as that put me a far way in my career, that set the tone and it’s what keeps me going to this day. Plus, the youngsters love me and give me the respect and they want me around them, they always want me to play. So whenever I get the opportunity, I just help them and help my team and play to the best of my ability. In football, you never know, maybe you can’t get another contract but maybe somebody can see you and you can get into coaching or whatever but you have to just keep going and it is something that I really love.”

Williams, who is a regular starter again for Portmore for the last month, wants a repeat of their championship success of last season on his mind.

“Over the years, Portmore always want to win the league, that’s our main objective. But the big picture is to play overseas, in the (CFU) club championship and in the (Concacaf) Champions league, so players get contract. Those are the things that Portmore United is really about,” he said.